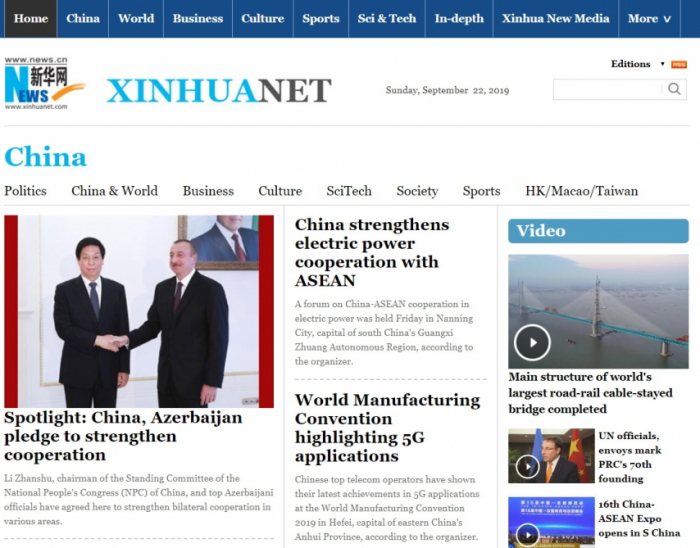 “Li Zhanshu, chairman of the Standing Committee of the National People's Congress (NPC) of China, and top Azerbaijani officials have agreed here to strengthen bilateral cooperation in various areas. During an official goodwill visit from Thursday to Saturday, Li met with Azerbaijani President Ilham Aliyev and conveyed Chinese President Xi Jinping's cordial greetings to him.

Li briefed President Ilham Aliyev on the great achievements of the People's Republic of China since its founding 70 years ago, saying that the Communist Party of China is forging ahead on the road of socialism with Chinese characteristics in line with China's national conditions.

The socialism with Chinese characteristics has now entered a new era, and China under the leadership of Xi is striving to achieve its "two centenary goals" and realize the Chinese Dream of the great rejuvenation of the Chinese nation, Li told President Ilham Aliyev.

China deems Azerbaijan as an important partner in Eurasia and is ready to implement the blueprint made by Xi and Aliyev on the development of bilateral ties, further cement political mutual trust, strengthen practical cooperation in various areas, and jointly safeguard the two countries' security and development interests, Li said.

President Ilham Aliyev asked Li to convey his best wishes to President Xi Jinping and said he had witnessed the great changes in China with his own eyes during his repeated trips to the country and that he admired such achievements.

Azerbaijan-China relations are developing rapidly with a rosy future, he said, adding that his country firmly adheres to the one-China principle, and intends to combat jointly with China the "three forces" of terrorism, separatism and extremism, and improve their coordination and cooperation on international and regional issues.”

“During a meeting with Ogtay Asadov, Speaker of the National Assembly of Azerbaijan, Li said his visit was aimed at strengthening cooperation between the two legislatures and implementing the important consensuses reached by the two heads of state.

Every country has a unique history, national situation and culture, so different civilizations should coexist harmoniously and learn from each other, Li said.

The NPC of China is willing to work with the National Assembly of Azerbaijan to promote cultural and people-to-people exchanges between the two countries, learn from each other, and cement public support for bilateral relations, he said.

Asadov said Li was the first top Chinese legislator to visit Azerbaijan in 19 years and that the trip has injected new vitality into the development of bilateral relations and the interactions between the two legislatures.

Azerbaijan and China have signed many cooperation deals and the two legislatures should help to deliver on the agreements, Asadov said.

An increasing number of Azerbaijani people are interested in Chinese culture and there is a need to promote educational, cultural and youth exchanges, he said.”

“At a meeting with Azerbaijani Prime Minister Novruz Mammadov, Li said Azerbaijan is located at the junction of Europe and Asia and is an important country along the Belt and Road.

Li said China is ready to boost economic and trade exchanges with Azerbaijan and enhance cooperation with the country in jointly building the Belt and Road and achieve more cooperation outcomes in such fields as energy, agriculture, transportation, logistics, tourism and informatization.

He welcomed Azerbaijan to the second China International Import Expo to be held in early November in Shanghai.

Mammadov said his country was among the earliest participants in the Belt and Road Initiative and is ready to expand cooperation with China in various areas.

He welcomed more Chinese investments in Azerbaijan and expected cooperation with China on the construction of a Trans-Caspian International Transport Corridor so that more Chinese goods can hit the Eurasian market via Azerbaijan,” the article concludes.