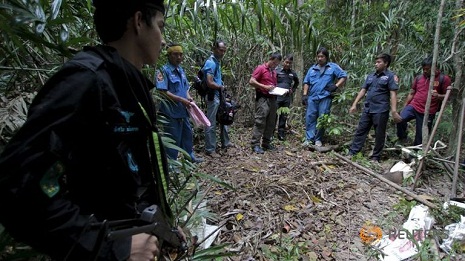 Malaysian police say they have uncovered 28 suspected human trafficking camps located around 500 metres from the country
“We discovered 139 of what we believe are graves,” national police chief General Khalid Abu Bakar told reporters.

“It’s a very sad scene … To us even one is serious,” he added. “We are working closely with our counterparts in Thailand. We will find the people who did this.”

He could not immediately give a figure of how many bodies might have been buried in the sites but the confirmation that there are 139 sites means the number of dead will be much higher than the 100 first suspected.

The dense jungles of southern Thailand and northern Malaysia have been a major route for smugglers bringing people to south-east Asia by boat from Burma – most of them Rohingya Muslims who say they are fleeing persecution – and Bangladesh.

Khalid added that one grave site was about 100 metres from a mass grave discovered in Thailand earlier this month.

The findings appeared to indicate a system of jungle camps and graves that dwarfs those found by Thai police in early May, a discovery that ignited regional concern about people smuggling and trafficking.

The discovery also follows repeated denials by top Malaysian officials – who have long been accused by rights groups of not doing enough to address the illicit trade –that such sites existed on their soil.

Khalid said the biggest camp that had been discovered in Malaysia could house around 300 people, while another one could take in around 100 people, showing the scale of the human traffickers’ operation in the area and highlighting fears that a high number of bodies will be unearthed.

“The forensic team has gone in and we will carry out the investigation,” Khalid told reporters in Wang Kelian, a Malaysian town where most of the grave sites were found.

“We will find out who caused this definitely. We will not condone anybody who is involved including Malaysian officials,” he said.

Khalid declined to say whether the victims are Rohingya or Bangladeshi, saying police have to wait until they exhume and identify the bodies.

Khalid also said they found at least one highly decomposed body left with just skin and bone. Police believed two to three of the camps were only abandoned as recently as two weeks ago because they found rice, vegetables, recently cooked meals and cooking utensils.

Photos taken by police provide a glimpse of the migrants’ ordeal in the camps. They were held in enclosures made of crude wooden fencing and covered with a tarpaulin.

The camps had areas for Muslim prayer rooms, cooking, and showering, plus guard posts and what appears to be a designated zone for sepak takraw, a kick volleyball game popular in Malaysia and Thailand.

Questioned on why there was no action taken earlier, Khalid said police have been building up intelligence based on 37 arrests of suspected human traffickers – including two policemen – since the start of the year, which led to the grim discovery.

No arrests have been made in connection to the discovery of the 139 grave sites.

Malaysian prime minister Najib Razak said on Monday he was “deeply concerned” by the discovery in the jungle.

“We will find those responsible,” Najib said in comments on his Facebook page.

Earlier in the month he declared “Malaysia does not and will not tolerate any form of human trafficking.”

But the revelation is likely to focus new attention on Malaysia’s record in battling a scourge that activists say is carried out by criminal syndicates, likely with the complicity of authorities.

The United Nations refugee agency UNHCR estimated on Friday that 3,500 migrants were still stranded on overloaded vessels with dwindling supplies, and repeated its appeal for the region’s governments to rescue them.

Malaysia and Indonesia have said they will allow the thousands still at sea to come ashore temporarily and ordered their navies to rescue people found adrift.

Thailand has said it will not allow migrant boats to land, but Prime Minister Prayuth Chan-ocha said on Monday the Thai navy would help those in medical need. “I have ordered the navy to take our boats and set up a floating command centre to help those who are hurt,” he said.