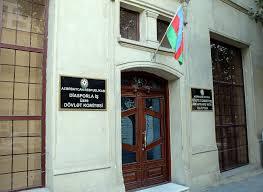 The Azerbaijani State Committee for Work with the Diaspora condemns provocative actions by Armenians during FK Qarabag’s Europa League group stage match against F91 Dudelange at the Josy Barthel stadium in Luxembourg, reads an appeal of the committee.

The appeal says that during the participation of various Azerbaijani teams and athletes in international competitions, a large group of fans representing the diaspora constantly support them. This is always appreciated by both athletes and the sports community.

“In various international competitions, the committee appealed to compatriots living abroad who massively participated as fans in these events,” reads the appeal. “At the above-mentioned football match, the committee took the necessary steps for our compatriots to participate, and more than 350 compatriots living in Belgium, the Netherlands, France, Germany, Switzerland, Luxembourg and other European countries came to the stadium to root for FK Qarabag team.”

The statement said that the State Committee for Work with the Diaspora will continue to provide support to Azerbaijani athletes from compatriots living abroad.

“Any provocation during international sports competitions is unacceptable, and responsibility for what happened lies with the groups of provocateurs and the forces behind them,” reads the statement. “European countries once again witnessed that Azerbaijanis participated in this sporting event massively and in an organized way, while Armenians, regardless of their place of residence, continue to show their essence by taking all types of radical and provocative steps. The State Committee believes that legal assessment will be given to this provocative action.”

Following this, a verbal altercation occurred between the fans and the players, as a result of which the chief referee stopped the game. The game was resumed after about 20 minutes. In a pause resulting from the provocation, the minister of sports of Luxembourg, on behalf of the Luxembourg government, apologized to the FK Qarabag team and its fans. Representatives of the FK Qarabag Club on the spot expressed dissatisfaction with the situation to the Dudelange Club and UEFA representatives.

The match ended with a victory of FK Qarabag with a score of 4:1.