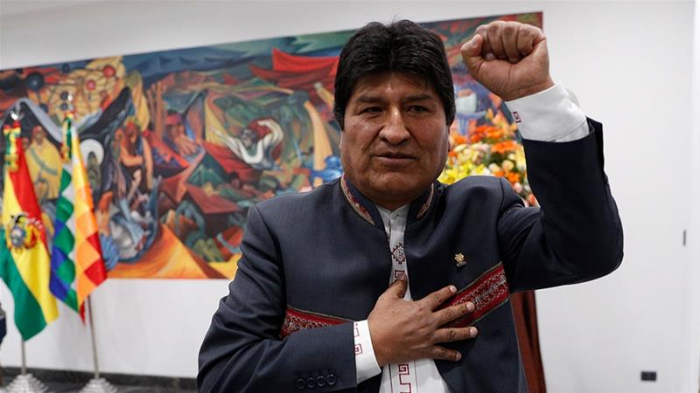 A final vote count by Bolivian authorities on Thursday handed leftist President Evo Morales an outright victory as thousands of angry protesters marched against him chanting “fraud”, allegations that threaten to mar his fourth term.

With 99.99% of votes counted by Bolivia’s electoral board, Morales secured a 10.56 point lead over his closest rival Carlos Mesa, narrowly avoiding a risky run-off vote.

The remaining 0.01% of ballot sheets were voided but represent just over 500 votes, well short of the 30,000 needed to change Morales’ first-round victory.

“What just happened minutes ago is something that we all expected. We knew how stubborn the president is,” Mesa said in a video released by his campaign shortly after counting ended.

“Don’t get discouraged. Our struggle is democratic,” he told his supporters as police fired tear gas at protesters who marched by the thousands through the streets of the Highland capital, La Paz.

Morales, already Latin America’s longest-serving president, will now govern South America’s poorest country from 2020 to 2025 for a total of 19 years in power.

An unexpected halt to an official quick count after the election on Sunday, followed by a swing in Morales’ favour a day later, sparked suspicions of vote-rigging and led to violent street protests.

Morales had already faced charges of authoritarianism for seeking another term this year in defiance of term limits and a 2016 national referendum that opposed lifting them. A Bolivian court ruling authorized his run on the grounds that barring him would violate human rights.

“I don’t want Bolivia to live in a dictatorship,” protester Delia Bustillos said. “This fraud that the government is trying to hide ... started when he ignored the results” of the 2016 referendum.

Morales has denied meddling in the vote count, dismissing charges of rigging the election as part of a sinister bid by the right-wing opposition to stoke unrest to topple him, pointing to electoral offices that were torched in some cities in protests earlier this week.

Morales rebuked international election observers earlier on Thursday for questioning the legitimacy of the process and ignored their calls to convene a second-round vote to restore credibility to the election.

This year’s presidential election was the tightest since 2002 when Morales came just behind rival Gonzalo Sanchez de Lozada. Sanchez de Lozada ended up resigning in the wake of clashes over plans to export natural gas that killed dozens, leaving the presidency to his then-vice president Mesa, who himself stepped down three years later in 2005.

Morales swept to power in 2006 as Bolivia’s first indigenous president, ushering in a rare period of economic and political stability and outlasting other leftist leaders in South America who have since been replaced by right-leaning governments.

Morales, who won his past two elections with more than 60% of the vote, thanked his political base for his electoral triumph on Thursday as Mexico, Venezuela and Cuba sent him congratulations.

“This is the fourth consecutive election that we win democratically,” Morales said on Twitter.

However, the United States, Brazil, Argentina and Colombia, warned that they would not recognize the results of an election that did not reflect “the will of the Bolivian people,” according to Colombia’s foreign ministry, which spoke on behalf of the group.

Morales had already celebrated victory on Sunday night, when the electoral board’s quick count of ballots at 85% showed him headed to a run-off race with Mesa. He has attributed his later gains to votes from rural areas where he has more support.

Mesa’s campaign revealed as final votes were tallied what it described as “proof” of vote-rigging by Morales’ government, saying it had identified some 100,000 ballots in favor of him that, under Bolivian electoral law, should have been annulled due to inconsistencies.

Carlos Alarcon, a candidate for congress for Mesa’s party, said the campaign suspected an algorithm had been used to systematically ratchet up votes for Morales.

“We’re talking about 109,267 questionable votes,” Alarcon said, more than enough to erase the lead by which Morales secured a first-round win.

Reuters could not independently verify the claim, which Alarcon said was the result of analyzing pictures of tally sheets from polling places and comparing them with numbers registered on the electoral board’s webpage.

Bolivia’s electoral board denied charges of electoral fraud and said it welcomed an audit by the Organization of American States (OAS), whose mission to observe Bolivia’s election this year flagged “serious doubts” about fairness in the race.

The Washington-based OAS has said the conclusions from its audit must be legally binding. Its chief, Luis Almagro, said on Thursday the election results should not be considered legitimate in the meantime.

Yerko Ilijic, a Bolivian political analyst, said he expected anti-government protests to eventually fade but that troubles for Morales would continue because he had won his weakest mandate yet.

“I don’t think he’ll be able to finish his term,” Ilijic told Reuters. “Not because people will rise up against him but because it will be hard for him to govern.”