Evacuations as wildfire breaks out in Los Angeles 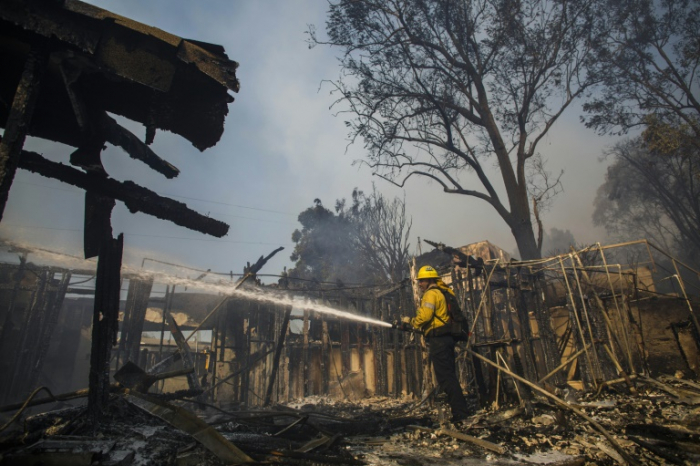 More than 1,000 firefighters battled a wind-driven blaze Monday that broke out near the renowned Getty Center in Los Angeles, prompting widespread evacuations as the flames destroyed several homes and forced the shutdown of schools and roads, AzVision.az reports citing AFP.

The so-called Getty Fire ignited overnight near a major freeway and quickly spread south and west towards neighborhoods, scorching some 600 acres (240 hectares) and sending people fleeing in the dark.

By Monday afternoon, fire crews had slowed the pace of the blaze and were racing to contain it before strong winds hit the region again Tuesday evening through Thursday.

Authorities said some 1,100 firefighters were battling an inferno that threatened 10,000 structures, many of them multi-million dollar homes.

Among those forced to flee was Los Angeles Lakers star LeBron James, who tweeted that he and his family had evacuated his home in the upscale neighborhood of Brentwood during the night.

"Man these LA fires aren't no joke," he said. "Had to emergency evacuate my house and I've been driving around with my family trying to get rooms. No luck so far!"

He later tweeted that he had found a place to stay.

Arnold Schwarzenegger also said on Monday that he had to flee.

"We evacuated safely at 3:30 this morning," the actor and former California governor tweeted. "If you are in an evacuation zone, don't screw around. Get out."

Monday night's red carpet premiere in Los Angeles of "Terminator: Dark Fate," starring Schwarzenegger, was canceled because of the fire.

"We will be donating food intended for the after-party to the American Red Cross, which is serving those affected by the fires," Paramount said in a statement.

The Getty Center, which is home to a priceless art collection, said none of the pieces were under threat from the flames, notably because the building is designed to be fire resistant.

"Many have asked about the art -- it is protected by state-of-the-art technology," the museum said in a tweet.

The Getty Fire broke out as California has been dealing with a number of wildfires that have ignited throughout the state in the last week, forcing massive evacuations and power cuts.

California's governor declared a statewide emergency on Sunday as a wind-driven fire in the Sonoma wine region north of San Francisco spread out of control, forcing tens of thousands to flee.

The Kincade Fire, which erupted last Wednesday and is the largest so far this year, had spread to more than 66,000 acres -- or more than 100 square miles (260 square kilometers) -- by Monday afternoon and was only 15 percent contained.

Firefighters have also been battling a number of additional fires fed by strong winds, low humidity and high temperatures.

Residents who fled the Kincade Fire recalled hasty departures as they waited it out in the safety of a community center in Petaluma, California.

"The police came with loudspeakers. We weren't expecting it," said Kathy Amundson, who fled with her wheelchair-bound 90-year-old mother Joy.

"We smelled smoke, we couldn't see it," she said. "Looks like our home is safe but the fear is wind blowing embers and then it starts new fires."

Others were not so lucky. The fire has destroyed dozens of homes and vineyards, including the renowned 150-year-old Soda Rock Winery.

Authorities said more than 3,000 firefighters and responders were battling the Kincade Fire, which was not expected to be fully contained before November 7.

Firefighters are struggling to prevent the flames from spreading west toward areas that have not experienced fires since the 1940s and where the vegetation is dense and dry, providing dangerous fuel.

An estimated 180,000 people were under mandatory evacuation orders, including parts of the city of Santa Rosa and a large swath of Sonoma County extending all the way to the Pacific Ocean.

Nearly 80,000 structures are threatened, according to the county sheriff's office.

In a bid to reduce the risk of fire, California's largest utility, Pacific Gas & Electric Co., has been turning off power to hundreds of thousands of customers across northern and central California.

PG&E has come under intense scrutiny after it emerged that one of its transmission lines may have played a role in the Kincade Fire.

PG&E, which filed for bankruptcy protection earlier this year, has been blamed for several other fires in the state in recent years.