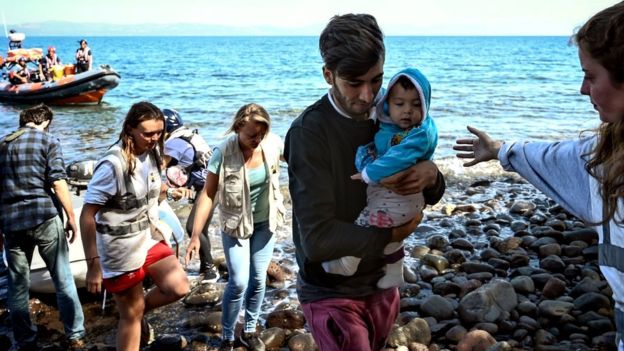 Thousands of people living in "abysmal" refugee camps on two Greek islands are "on the edge of catastrophe", Europe's human rights watchdog has said.

Dunja Mijatovic, Council of Europe Commissioner for Human Rights, spoke of an "explosive situation" on the Aegean islands, home to 36,000 asylum seekers.

The prime minister said refugees would be protected but Greece's gates would not be thrown open to everyone.

The left-wing opposition has criticised the law and some humanitarian groups, including United Nations refugee agency UNHCR, have warned it could restrict protection for asylum seekers.

But centre-right Prime Minister Kyriakos Mitsotakis said the move would deter those not entitled to asylum, telling parliament: "Enough is enough."

Why have migrants returned to Greece?

Nearly one million migrants refugees, including many fleeing war in Syria, crossed from Turkey to the Greek islands in 2015. Turkey agreed a financial deal with the EU to curb the influx but is still hosting 3.6 million Syrians.

In recent months the numbers have surged and all the camps on the Greek islands are filled beyond capacity.

Ms Mijatovic visited reception facilities on the islands of Lesbos and Samos. Lesbos has a capacity of 2,840 but is currently housing 16,924 immigrants, many of them in the cramped Moria camp.