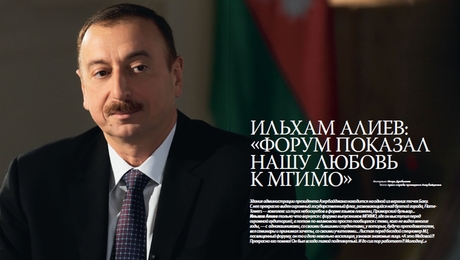 MGIMO Journal, an edition of the Moscow State Institute of International Relations (MGIMO), has featured an interview with Azerbaijani President Ilham Aliyev that he gave immediately after the First World Forum of MGIMO Graduates in Baku this April.

The Azerbaijani leader shared his memories of Nikolay Lebedev, rector of MGIMO under whom President Ilham Aliyev himself studied. “I have great respect to him, and I said this during my speech today. Yesterday I spent two hours with him, and we recalled those times…” “Under him MGIMO was prospering, and was the leading university in the country. And Anatoliy Vasilyevich Torkunov restored these traditions. I spoke of this at the forum. We, the alumni, are proud that MGIMO is not just the leading higher educational institution in Russia, but in the entire world. Many Azerbaijani graduates would tell you that the knowledge they received in MGIMO still helps them in most responsible positions in Azerbaijan,” said the President.

The Head of State highlighted new look of Azerbaijan`s capital, Baku, including the Flame Towers and the Heydar Aliyev Center. “They are new symbols of our city. They emerged as a result of urbanization. I think we managed to give modern architecture a chance to realize itself, and at the same time, to preserve tradition. Modern buildings must not conflict with the historic look of the city.”

The President spoke of the National Flag Square: “Our primary task was to remodel the area, rather than building the largest flag in the world. There were factories and a naval base in this area previously. We moved them to another site. And today we have a flag and the National Flag Museum on a 5 hectare site. The total area around this site is 60 hectares. We stretched the seaside boulevard from 3.5 km to 14 km.”

Responding to a question about what is the national idea for Azerbaijan, the Head of State said: “First and foremost, it is independence.” “Today Azerbaijan is a state with strong position in the region and in the world. And our recent election as a non-permanent member of the United Nations Security Council is the peak of international activity for any country, which is not among five permanent members of the Council.” “And, certainly, against the background of this, symbols of statehood – the flag, the anthem, the national emblem – as well as our work to remodel the look of Baku and other cities are instruments for raising the young generation in the spirit of patriotism and maintaining positive spirits within the society.

The Azerbaijani President was asked if he was planning to address a ceremony marking the 70th anniversary of MGIMO to take place in 2014. “You know I attended the celebrative events on the occasion of MGIMO`s 40th anniversary in 1984. It took place in the Column Hall in the House of Writers. The event was chaired by Nikolay Ivanovich Lebedev, and I was just a postgraduate student. In 1994 I was unable to attend the celebrative events, but in 2004 i was there and addressed the jubilee ceremony. So if I have an opportunity, I will be very much pleased to make an address in 2014 too.”

President Ilham Aliyev also touched upon the First World Forum of MGIMO Graduates. “It was a remarkable event in the life of our institute. It demonstrated that we are together and we have not lost contacts with each other…The forum showed our unity – the unity of people who achieved much in a variety of areas: in politics, diplomacy, business, journalism, etc.