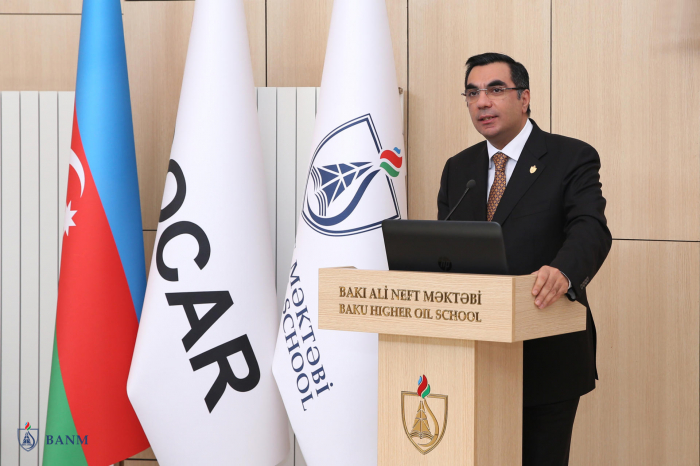 An opening ceremony of the Office of Erasmus + & International Programs (EIPO) was held at the campus of Baku Higher Oil School (BHOS).

The event was attended by representatives of the European Union’s Representation in Azerbaijan, the National Office of Erasmus +, the Ministry of Education and about 20 universities of Azerbaijan.

Speaking at the event, Rector of Baku Higher Oil School Elmar Gasimov said that since its founding, the BHOS has constantly expanded its cooperation with universities in the European Union, and that this cooperation covers many areas, including double diploma programs, organization of common summer schools, mobility programs, capacity building projects, etc.

He also noted that during the 2018/2019 academic year, about 40 exchanges have been carried out between the BHOS and universities in EU countries and that this cooperation is successfully continuing.

"The Erasmus + program offers Azerbaijani teachers and students the opportunity to study or undergo an internship in higher education institutions in the EU for 3-12 months. The Erasmus +program has been realized in Azerbaijan since 2014. Currently, 7 projects are being implemented as part of this program. Within the framework of the Erasmus + program, the government of Azerbaijan is trying to transfer our country from the category of partner countries to program countries. Taking this opportunity, I would like to inform you that the next tender for acceptance of projects will be announced tomorrow within the Erasmus+ program. Any higher education institution that meets the goals and priorities can participate in this tender. I would also like to note that this year, as part of the program, the European Union has increased the size of the budget that was allocated for projects by 3 times to 45 billion euros,” Rza Zulfugarzade added.

In their speeches, Head of the International Cooperation Department of the Ministry of Education Nijat Mammadli and Head of the National Office of Erasmus+ in Azerbaijan Parviz Bagirov also noted the comprehensive support provided for the implementation of projects, which are requisites for entering Europe. They highly appreciated the opening of the Office of Erasmus + & International Programs for the first time at the Baku Higher Oil School and called on other universities to establish coordinated cooperation with this office.

Head of the Office of Erasmus + & International Programs at the BHOS campus, Nargiz Tariverdiyeva, gave detailed information about the office's goals, projects, exchange of students, administrative and scientific groups, as well as prospects for further cooperation. She stressed the readiness to start close cooperation with all universities in our country.

Then, the ceremony participants took part in a familiarization tour of the new office and the BHOS campus.

Also, within the event, a training was held on the topic “Application for Participation in Projects for Capacity Building in the Field of Higher Education (CBHE)”.