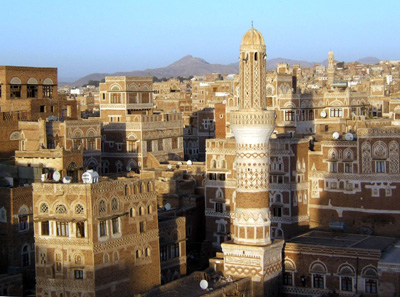 Thousands of people packed al-Sabeen Square in Yemen's capital Sanaa on Saturday to celebrate the Prophet Muhammad's birthday despite the security tensions in the country, AzVision.az reports citing Xinhua.

Welcome banners were hung over the square, which was decorated with green flags and colored lights, as loudspeakers blasted out hymns and the big flat screens around displayed shows.

"I came here to celebrate the birthday of God's messenger," said Dhaifullah Hizam, a resident of Sanaa.

Regarding the celebration as a "peace message," Ali Motahar, another attendant, urged "all Yemeni rival parties to stop the war."

Prophet Muhammad was born in 570 in Mecca, the holiest city in Islam. Muslims celebrate his birthday each year on the 12th day of Rabi'al-awwal, the third month in the Islamic calendar, which falls on Nov. 9 this year.

The celebration also took place in other Houthis-controlled cities in Yemen.

The Houthi rebels overran Sanaa and much of Yemen's north in late 2014 and forced the internationally-recognized government of President Abd-Rabbu Mansour Hadi into exile in Saudi Arabia.

The civil war, which has lasted more than four years, has killed tens of thousands of people and displaced 3 million others, pushing the impoverished country to the brink of famine.

The United Nations has been trying to rescue a peace deal reached between the Yemeni warring parties in Stockholm in late 2018.