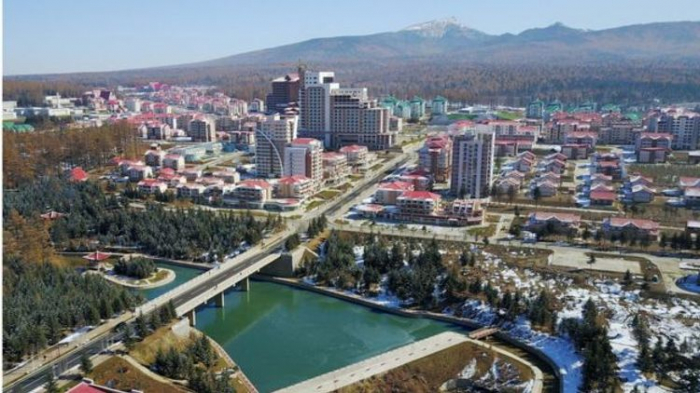 Leader Kim Jong-un cut the red ribbon at Samjiyon - hailed as one of the country's most important construction projects.

State media KCNA said the town - which is able to accommodate 4,000 families - boasts new apartments, a ski slope, and a stadium amongst other facilities.

However, forced labour is said to have gone into the construction of Samjiyon.

And the town - even if it lives up to state media billing - will be an outlier in North Korea, where the majority of people live in poor conditions.

According to non-governmental organisation the National Committee on North Korea, many "suffer from shortages of food, fuel, electricity, running water and other necessities".

According to Colin Zwirko, a correspondent at specialist site NK News, the town is a "model" of sorts.

"As it appears now, it [has] nice clean facades and unique, ornately designed buildings that would not resemble really any other town in North Korea," he told the BBC.

"Someone roaming around Samjiyon as a tourist would not stumble into less well-kept areas away from the main road, as is the case in Pyongyang and other cities."

Mr Zwirko added that the town is "quite small and walkable", measuring around 2-3km in either direction.