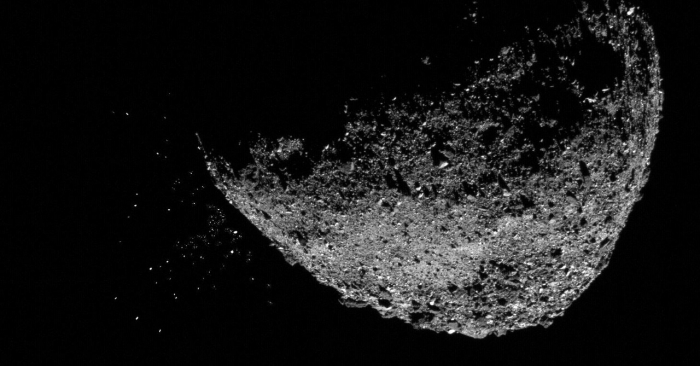 NASA's OSIRIS-REx mission arrived at near-Earth asteroid Bennu a year ago, and the spinning top-shaped space rock has been full of surprises. The latest findings now classify it as an active asteroid with observable events happening on the surface.

OSIRIS-REx and Bennu got to meet face-to-face on December 3 of last year. OSIRIS-REx has been orbiting the asteroid, which is 70 million miles from Earth, since December 31, 2018. It's a "rubble pile" asteroid, a grouping of rocks held together by gravity rather than a single object.

The greatest surprise of the mission happened only a few days in, when an unexpected observation occurred that signaled activity on Bennu, the mission researchers said. They detected particle plumes ejecting off the surface on January 6, followed by additional smaller plumes on January 19 and February 19.

Before the close approach of the spacecraft a year ago, they couldn't be sure if there was any activity on Bennu. Now they know for certain, which makes Bennu an active asteroid that is regularly ejecting material into space. This is not only rare, but it's also the first time scientists have had close-up observations of particle plumes erupting from an asteroid's surface, NASA said.

The particles range from single-digit centimeters to tens of centimeters in length, and some of them are slow-moving while others are quickly making their way through interstellar space. Some fall back onto the asteroid's surface, while others go into orbit around it, like small satellites.

About a hundred particles were ejected during each event in January and February. All three events occurred in different, specific places on the asteroid. And they all happened during what could be called the late afternoon on Bennu. None of them posed a risk to the spacecraft. The researchers noted that they can't rule out possible ejection events that occurred before the spacecraft arrived at the asteroid in December 2018.

They also spied persistent particles orbiting the asteroid, six of which they will target with future observations.

"The discovery of plumes is one of the biggest surprises of my scientific career," said Dante Lauretta, OSIRIS-REx principal investigator at the University of Arizona, Tucson.

Active asteroids can typically lose mass and eject particles through disintegration caused by unstable rapid rotations or ice sublimation -- but that wasn't the case here.

Instead, they believe the ejections are either being caused by micrometeorites impacting the surface; the loss of water molecules that are found within the hydrated minerals on the surface; or thermal stress fracturing of the asteroid's boulders, according to a study released in the journal Science on Thursday. All three of these causes could work together to cause the particle ejections as well, the authors said.

Bennu is covered in boulders rather than the large areas of fine-grain material that scientists expected. And OSIRIS-REx's instruments have confirmed that hydrated minerals, including magnetite, are abundant and widespread on the asteroid.

Bennu's surface experiences extreme temperature variations over its 4.3-hour retrograde rotation period, sometimes by as much as 100 Kelvin, according to the study. When two of the events were observed occurring at the mid-latitudes of the asteroid, the temperature varied from 250 Kelvin to 400 Kelvin. Given that the late afternoon timing is consistent for all three events, the researchers believe the temperature swings are causing thermal fracturing.

Some of the particles that escape the asteroid, only to fall back on it, could find their way to Earth.

Since arriving at the asteroid Bennu, OSIRIS-REx has been mapping its surface to determine the best spot to collect samples in 2020. This will be the first NASA mission to return samples collected from an asteroid, and the samples are expected back on Earth in 2023.

The asteroid is full of valuable materials that may even contain clues about how life began. Asteroids could even serve as fuel stations for robotic and human missions if we can unlock the hydrogen and oxygen inside them, NASA said.

It's also older than expected, between 100 million and one billion years old, and likely originated in the main asteroid belt. Bennu probably broke off of a larger asteroid in the belt between Mars and Jupiter a couple billion years ago. This knocked it through space until an orbit close to Earth locked it in place.

Bennu is the smallest body to ever be orbited by a spacecraft, just a little bit wider than the height of the Empire State Building, according to NASA.

The mission -- which stands for Origins, Spectral Interpretation, Resource Identification, Security-Regolith Explorer -- launched in September 2016 and is spending two years up close and personal with Bennu.

The sample from Bennu could help scientists understand not only more about asteroids that could impact Earth but also about how planets formed and life began.

The asteroid could pass closer to Earth than the moon in 2135, with even closer approaches possible in 2175 and 2195. A direct hit is unlikely, but the data gathered during this mission can help determine the best ways to deflect near-Earth asteroids.