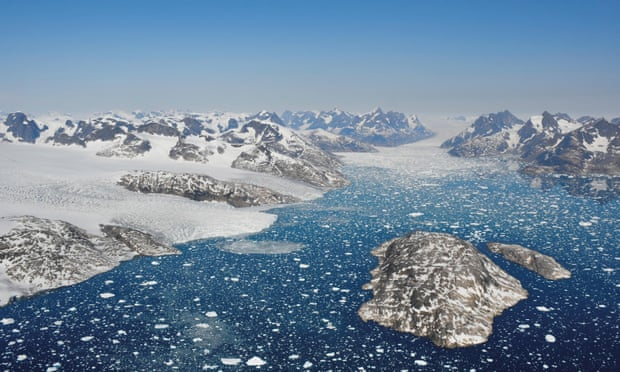 Greenland’s ice sheet is melting much faster than previously thought, threatening hundreds of millions of people with inundation and bringing some of the irreversible impacts of the climate emergency much closer, the Guardian reports.

Ice is being lost from Greenland seven times faster than it was in the 1990s, and the scale and speed of ice loss is much higher than was predicted in the comprehensive studies of global climate science by the Intergovernmental Panel on Climate Change, according to data.

That means sea level rises are likely to reach 67cm by 2100, about 7cm more than the IPCC’s main prediction. Such a rate of rise will put 400 million people at risk of flooding every year, instead of the 360 million predicted by the IPCC, by the end of the century.

Sea level rises also add to the risk of storm surges, when the fiercer storms made more likely by global heating batter coastal regions. These impacts are likely to strike coastal areas all around the world.

“These are not unlikely events or small impacts,” said Andrew Shepherd, professor of earth observation at the University of Leeds, one of the lead authors of the study. “[These impacts] are happening and will be devastating for coastal communities.”

Greenland has lost 3.8tn tonnes of ice since 1992, and the rate of ice loss has risen from 33bn tonnes a year in the 1990s to 254bn tonnes a year in the past decade. Greenland’s ice contributes directly to sea level rises as it melts because it rests on a large land mass, unlike the floating sea ice that makes up much of the rest of the Arctic ice cap.

About half of the ice loss from Greenland was from melting driven by air surface temperatures, which have risen much faster in the Arctic than the global average, and the rest was from the speeding up of the flow of ice into the sea from glaciers, driven by the warming ocean.

Oceans have absorbed most of the excess heat arising from our disruption of the climate to date, and much of the carbon dioxide, but they are reaching the limits of their capacity to do so. Sea level rises are driven not only by melting ice but by the thermal expansion of the seas as they warm.

The scale and speed of the ice loss surprised the team of 96 polar scientists behind the findings, published on Tuesday in the journal Nature. The Ice Sheet Mass Balance Inter-comparison Exercise comprised 26 separate surveys of Greenland from 1992 to 2018, with data from 11 different satellites and comparisons of volume, flow and gravity compiled by experts from the UK, Nasa in the US, and the European Space Agency.

Erik Ivins, of the Nasa Jet Propulsion Laboratory in California, stressed that the findings – the most comprehensive survey yet of the ice sheet over the past few decades – were based on observations, rather than computer modelling.

The peak year for ice loss, according to the observations, was 2011 when 335bn tonnes of ice were lost. Since then, the average rate has slowed to 238bn tonnes a year from 2013, but this does not include the most recent observations from this summer, which showed even more widespread melting.

Governments are meeting in Madrid for the second week of crucial UN talks on the global response to the climate emergency. Campaigners have been frustrated by the slow pace of the negotiations, despite growing public clamour, including a 500,000-strong march through the centre of the Spanish capital led by the Swedish climate activist Greta Thunberg.

Rachel Kennerley, a climate campaigner at Friends of the Earth, said: “We’re in a climate emergency – the impacts are coming thicker and faster every day. This latest research is yet more in an ever-growing pile of evidence which shows we need real action, not warm words. Governments need to stop dragging their feet and deliver real emissions cuts and real support for vulnerable people already experiencing the devastating effects of climate breakdown.”

The IPCC is the gold standard for climate science, but some experts are concerned that its findings do not take into account the potential for “tipping points”, thresholds beyond which climate breakdown accelerates and becomes catastrophic and irreversible.

Louise Sime, a climate scientist at the British Antarctic Survey, said of the new paper: “This finding should be of huge concern for all those who will be affected by sea level rise. If this very high rate of ice loss continues, it is possible that new tipping points may be breached sooner than we previously thought.”