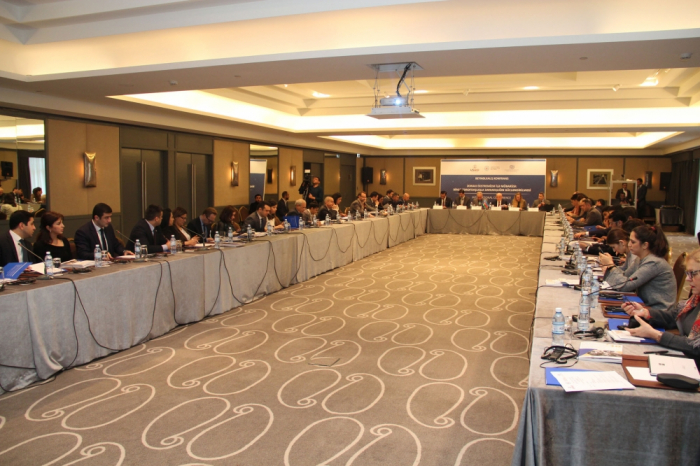 The United Nations Migration Agency - The International Organization for Migration (IOM) in Azerbaijan jointly with the State Committee on Religious Associations of the Republic of Azerbaijan has organized an international conference titled “Preventing violent extremism: building resilience in partnership”.

Vladimir Gjorgjiev, Chief of IOM Mission in Azerbaijan in his opening remark spoke on the dangers of extremism. Emphasizing the importance of education, literacy, awareness raising and other preventive measures in the fight against radicalization and violent extremism, Gjorgjiev said that his organization has implemented a number of projects in this area.

Mubariz Gurbanli, Chairman of the State Committee on Religious Associations of the Republic of Azerbaijan emphasized religious radicalism and extremism and said that the adoption of the Law of the Republic of Azerbaijan “On the fight against religious extremism” and preventing measures taken by the government did not allow extremist groups supported abroad raise in the country. “In our constitution or laws any religion has not a superior position. As a result of such impartial attitude by the government today there are 14 churches and 7 synagogues in our country, 35 non-Islamic religious communities are registered.”

Ghulam M. Isaczai, UN Resident Coordinator in the Republic of Azerbaijan said that extremism is a threat that doesn't recognize the borders and it is important to work together to prevent it.

The US Agency for International Development (USAID) mission in Azerbaijan, Eileen Lowles, Eileen Lawless, Director of the Office for Governance and Economic Resilience, USAID/Azerbaijan emphasized that it is possible to prevent the spread of violent extremism only by expanding cooperation.

Following the opening remarks the experts made presentations on legal bases for preventing violent extremism and radicalization, IOM’s interventions with preventing violent extremism (PVE) component in Azerbaijan, institutional response and coordination for PVE, role of religious education in PVE, activities and exchange of best practices in building an inter-faith dialogue between the EU and Azerbaijan, increasing resilience of local youth in Azerbaijan, community based approach in PVE and etc.

The international conference was organized as a part of the Community Resilience to Vulnerabilities (CRV) Activity funded by USAID/Azerbaijan and implemented by IOM Azerbaijan.