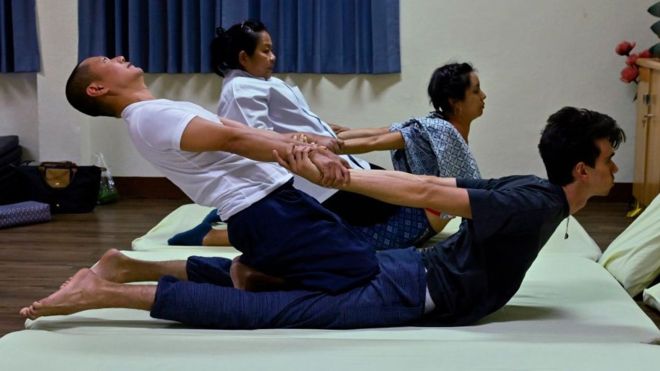 The back-cracking traditional Thai massage has been added to a prestigious Unesco heritage list.

Nuad Thai is now part of the Intangible Cultural Heritage of Humanity, which features traditions and practices passed across the generations.

By being part of the list, Thai massage has been recognised as something to be preserved for future generations.

Unesco is the United Nations' agency for education, culture, and science.

The intangible cultural heritage list is separate from the world heritage list, which recognises buildings and sites of prominence.

There are 550 items on the cultural heritage list - split into three categories - from 127 countries.

Items are added every year, with this year's committee meeting in Bogota, Colombia.

Unlike conventional massages, Thai massages involve a lot of movement and typically sees people assuming a series of different positions.

Therapists use not only their hands but sometimes their forearms and knees to apply pressure. There is also no oil involved in Nuad Thai massage.

According to Unesco, the practice has its "roots in self-care in Thai peasant society of the past, [where] every village had massage healers whom villagers would turn to when they had muscle aches from working the field".

According to Unesco, the intangible culture heritage list seeks to recognise things that are "important to preserve for future generations... [like] songs sung and stories told".

It adds that these things "form part of a heritage and this requires active effort to safeguard it".