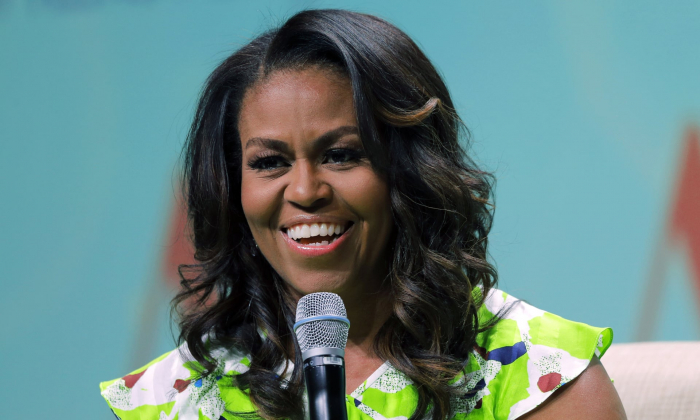 Michelle Obama has sent a public message of support to the 16-year-old climate activist Greta Thunberg after the teenager was mocked by Donald Trump, the Guardian reports.

“@GretaThunberg, Don’t let anyone dim your light,” the former first lady wrote following a visit to Vietnam. “Like the girls I’ve met in Vietnam and all over the world, you have so much to offer us all. Ignore the doubters and know that millions of people are cheering you on.”

The message comes after Trump, 73, tweeted that Thunberg, who has been diagnosed with Asperger’s syndrome, had an “anger management problem” and should “chill”.

“So ridiculous,” the president wrote. “Greta must work on her Anger Management problem, then go to a good old fashioned movie with a friend! Chill Greta, Chill!”

Thunberg swiftly changed her bio description on Twitter. “A teenager working on her anger management problem,” it now reads. “Currently chilling and watching a good old fashioned movie with a friend.”

Thunberg has caught the ire of many US conservatives for helping to spotlight a climate emergency which her critics pretend does not exist. That ire was in evidence this week, when Time magazine named Thunberg its person of the year, drawing much criticism from climate crisis deniers.

But Trump’s attack on her, in personal terms, from his presidential bully pulpit struck many observers as a marked and hypocritical escalation.

The first lady, Melania Trump, and Trump’s eldest son recently reacted with outrage when a witness called by Democrats to testify in the impeachment hearings punned on the name of Trump’s 13-year-old son, Barron, to make a point about how presidents are not kings. Melania Trump is also the nominal head of an initiative against online bullying called Be Best.

“A minor child deserves privacy and should be kept out of politics,” Melania Trump wrote at the time.

Speaking at a youth leaders conference in Malaysia’s capital city of Kuala Lumpur, organised by the Obama Foundation, on Friday, the former president Barack Obama said island nations and poor coastal countries facing the severest effects of climate change were offering a “moral call to the rest of the world” to act now.

“For those of you who are … experiencing the effects of it right now, there may be some hard questions in terms of adaptation versus mitigation,” he said.

Island countries that could disappear due to rising sea levels had on Thursday accused rich nations of losing sight of the urgency of the crisis, as a UN summit enters the final stretch of negotiations for countries to honour the 2015 Paris agreement to combat global warming.

“Your voice, your witness to what’s happening right here and now, is a moral call to the rest of the world. And figuring out how to tell the story of what you are seeing, and the losses that are already taking place, that’s going to be important.“

The US signed up to the 2015 Paris agreement during Obama’s presidency, promising a 26-28% cut in emissions by 2025 from 2005 levels. But the administration of Obama’s successor, Trump, filed paperwork last week to withdraw from the pact.

The Paris accord aims to avoid the most catastrophic scenarios foreseen by climate scientists by limiting the rise in average global temperatures caused by burning fossil fuels.

Once it exits, the US – the top historic greenhouse gas emitter and leading oil and gas producer – will become the only country outside the accord.

Obama said that it is up to the world’s youth to lead the charge in dealing with climate change, blaming the previous generation for failing to handle the issue “the way it should have”.

“The oceans will be rising, and that is going to displace people. So we’ll have to anticipate and care for some of the consequences, including large-scale migrations and disruptions. That’s going to be very possible,” Obama said.

“Old people are not going to worry about this as much as young people because they’re going to be gone when the full effects of this will come. So you’re going to have more urgency and educate your communities.”