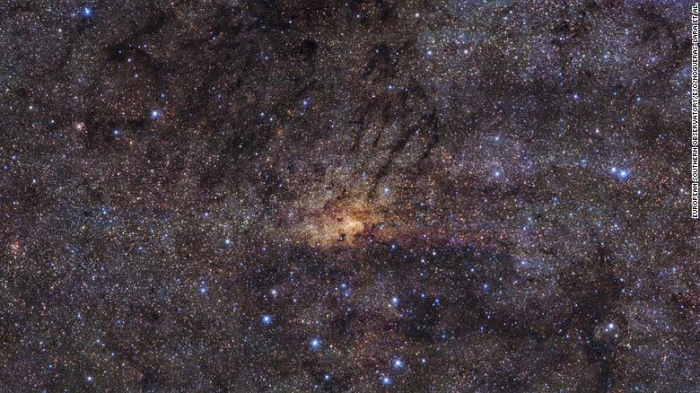 Astronomers used a telescope to look into the heart of our galaxy, the Milky Way, in great detail and found a surprising bit of history.

Their findings published Monday in the journal Nature Astronomy.

Previously, astronomers believed that star formation was continuous in the central region over the course of the galaxy's history.

Instead, the new data from the telescope revealed that during the early years of the galaxy, 80% of its stars were formed in the central region. This time period lasted between 8 and 13.5 billion years ago, dating back to the very beginning of the galaxy. Then, 6 billion years passed after this era with a significant drop-off in star birth.

But 1 billion years ago, the star drought ended when star formation ramped up again. This lasted for 100 million years.

"The conditions in the studied region during this burst of activity must have resembled those in 'starburst' galaxies, which form stars at rates of more than 100 solar masses per year," said Francisco Nogueras-Lara, study author at the Max Planck Institute for Astronomy in Heidelberg, Germany. "This burst of activity, which must have resulted in the explosion of more than a 100,000 supernovae, was probably one of the most energetic events in the whole history of the Milky Way."

Currently the entirety of the galaxy forms stars at a rate of about one or two solar masses the size of our sun per year.

The observations were possible because instruments on the telescope are sensitive to infrared light and can see the galactic center through the haze of dust that normally obscures it from view.

"Our unprecedented survey of a large part of the Galactic center has given us detailed insights into the formation process of stars in this region of the Milky Way," said Rainer Schödel, observation lead for the study at the Institute of Astrophysics of Andalusia in Granada, Spain.