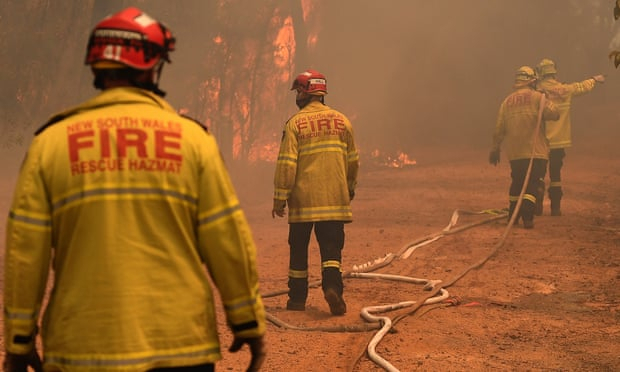 Preliminary analysis suggested that Tuesday was the hottest day on record for Australia, with an average maximum across the country of 40.9C. The temperature beat the previous 40.3C set on 7 January 2013, in a record going back to 1910.

Confirming the unprecedented nature of the current devastating fire season, the bureau has also found that 95% of Australia experienced fire danger weather that was well above average.

Above average temperatures, high winds, severe drought and the driest spring on record combined to bring dangerous conditions to many parts of the country.

In a special climate statement, the bureau said that by September most of the east of the continent was “primed for high fire danger ratings”, leading to hundreds of homes being lost in New South Wales.

September to November had been the driest, and second warmest, spring on record.

Fire danger
The bureau uses a tool known as the forest fire danger index (FFDI) to assess the risk of bushfire, combining temperature, wind, humidity, fuel and an assessment of drought to deliver an overall rating. The FFDI record goes back to 1950.

Cumulative forest fire danger index (FFDI) values for spring in each year since 1950.
The bureau’s analysis found that in October and November, every state and territory had experienced dangerous fire weather.

When the bureau added all the fire ratings together, they found this “accumulated FFDI” was the highest on record across the continent.

North-east NSW had an average score of 25 or above – in the “very high” FFDI category – for 21 days, beating the previous highest spring count of 11 days in 2002. The average number of spring days with very high fire risk in the region is just two.

Firefighters, many of them exhausted, have been fighting to save homes and buildings up and down the east coast since the fire season started earlier than normal.

NSW RFS confirmed on Wednesday that 768 homes had been lost and almost 65000 saved during the current fire season, which still has many weeks to run.

A December heatwave starting Wednesday could also break temperature records across South Australia, Victoria and NSW, the bureau has said.

Former fire chiefs and emergency services leaders said on Tuesday they would convene their own national bushfire summit, saying climate change was forcing a rethink on how Australia should prepare for and fight bushfires.

On Monday, 22 health and medical groups called on the federal and NSW governments to respond to the “public health emergency” caused by the smoke haze from the NSW fires.

Guardian Australia has revealed that since August 2019, the fires in NSW and Queensland have emitted 250 million tonnes of carbon dioxide – almost half the country’s entire annual carbon footprint.