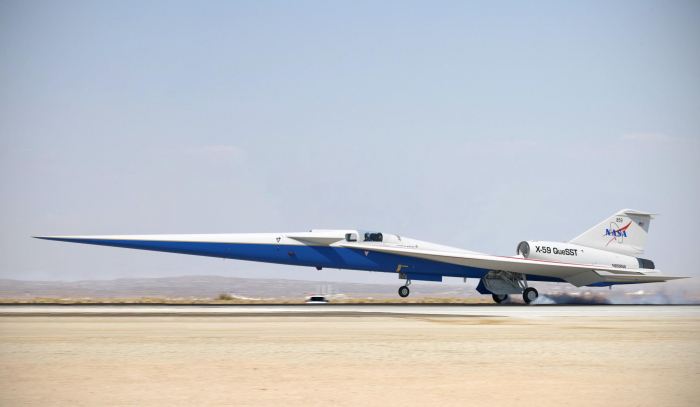 Nasa's X-59 space plane, capable of flying faster than the speed of sound without the loud boom that comes with supersonic flight, is finally nearing completion.

The plane will be the first large scale, piloted X-plane that Nasa has launched in more than 30 years when it is finally put together.

It could also herald a new era in fast space travel, as it attempts to overcome the problems that have blighted previous attempts like Concorde. Normally, supersonic planes create a loud boom when they reach the speed of sound and have as a result been banned from flying over populated areas – but the creators of the X-59 claim it will be almost silent.

And the space agency has announced that it is cleared for final assembly and "integration of its systems" after being looked over by senior managers.

The plane – which has the full name X-59 Quiet SuperSonic Technology (QueSST) – is being put together by Lockheed Martin, which will now work to complete it ahead of testing.

It should be approved for its first flight in 2020, and the actual launch will come a year after that.

“With the completion of KDP-D we’ve shown the project is on schedule, it’s well planned and on track. We have everything in place to continue this historic research mission for the nation’s air-traveling public,” said Bob Pearce, NASA’s associate administrator for aeronautics, in a statement.

Nasa says that the new plane will make a boom that will only be audible as a "gentle thump", or might be entirely silent. It is able to do because of its precise shape, which looks something like an even more sharp version of the Concorde.

It will fly nearly as fast as its lookalike, with a cruising speed of 1.42.

That will be put to the test when the plane is ready to fly. The trials will see it sent over "select US communities" in test flights that wil allow Nasa to measure it using sensors and people on the ground who will "gauge public perception" of the sound of the plane.