Same-sex sexual behavior in animals: Do we have it all wrong? 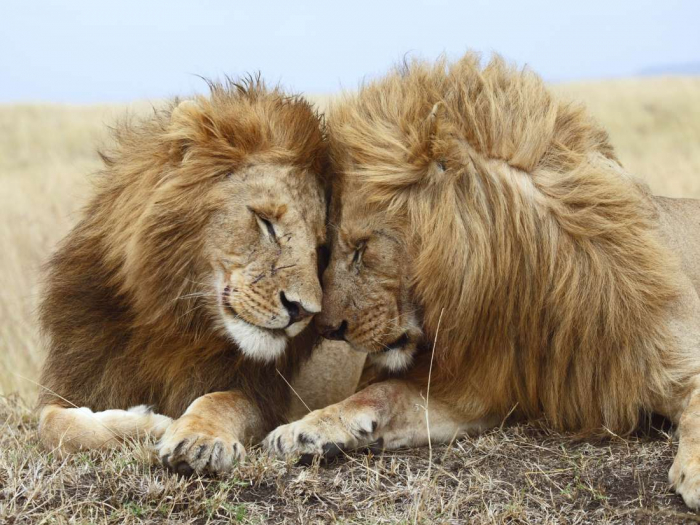 Many animals, from a range of phyla and species, display same-sex sexual behaviors. This has intrigued evolutionary biologists, but have they been looking at the subject all wrong?

Over the years, researchers have discovered that many animals sometimes engage in same-sex sexual behaviors.

Pigeons, for example, prefer to be with another bird of the same sex than remain alone, while bonobos and even some lions prefer to engage in same-sex mating-like activities.

These behaviors have intrigued and mystified evolutionary biologists, who have started from the premise that any form of sexual behavior is meant for mating and producing offspring.

Since mating and securing the continuation of the species can be such a high-stakes activity in the wild, evolutionary biologists have long considered that activities not conducive to the perpetuation of the species — such as engaging in nonreproductive sex with an animal of the same biological sex — are "costly" for the species.

Why, then, do some animals do it? In wondering this, many zoologists have looked for ways of showing that same-sex sexual behaviors might actually enhance animals' reproductive success, in one way or another.

Some evolutionary biologists have also assumed that different animals of different species have evolved same-sex sexual behaviors independently. However, the reasons for this remain unclear.

What if these assumptions are all wrong, though? What if same-sex sexual behavior has existed in the animal kingdom from the very beginning?

"We propose a shift in our thinking on the sexual behaviors of animals," says first study author Julia Monk, adding, "We're excited to see how relaxing traditional constraints on evolutionary theory of these behaviors will allow for a more complete understanding of the complexity of animal sexual behaviors."

They also suggest that although evolutionary biologists usually think of same-sex sexual behavior as "costly" as far as reproduction is concerned, it may actually be "neutral" — that is, not affecting rates of reproductive success one way or the other.

This would explain why same-sex sexual behaviors persist among animals, instead of having died out, as any truly unhelpful or "costly" behaviors typically would have.

Sometimes, the researchers add, same-sex sexual behaviors may even be helpful from a reproductive perspective. This, they say, is because it may sometimes be difficult to discern which animals within a species are of a different biological sex.

The recent case of two male-seeming lions — both of which had manes — that mated and showed signs of affection illustrates this perspective. One of the lions, zoologists have suggested, may actually have been a female, since maned lionesses are common in that species.

Potentially, mating with every animal available without first discerning their sex would also increase their chances of successfully ensuring the species' survival.

"[I]f you're too picky in targeting what you think is the opposite sex, you just mate with fewer individuals," notes study co-author Max Lambert, Ph.D.

'Impressed by the diversity of life'

The researchers also explain that there is a clear need to study same-sex sexual behaviors in animals more closely. Typically, they say, sightings of animals in the wild engaging in same-sex mating-like activities have been accidental.

This means that researchers tend to have a hard time comparing such opportunistic sightings — which may lack contextualization — with the display of different-sex sexual behaviors in the same species.

"So far, most biologists have considered [same-sex sexual behavior] as extremely costly and, consequently, something that is aberrant," says Lambert.

However, he cautions, "This strong assumption has stopped us as a community from actively studying how often and under what conditions [same-sex sexual behavior] is happening."

"Given our casual observations suggest that [same-sex sexual behavior] seems to happen pretty commonly across thousands of species, imagine what we would have learned if we had assumed this was something interesting and not just a rampant accident," he adds.

The researchers also warn that scientists' own biases about how they perceive different types of sexual orientation among humans may have impacted their study of sexual behaviors in other animals.