Study reveals a role for jumping genes during times of stress 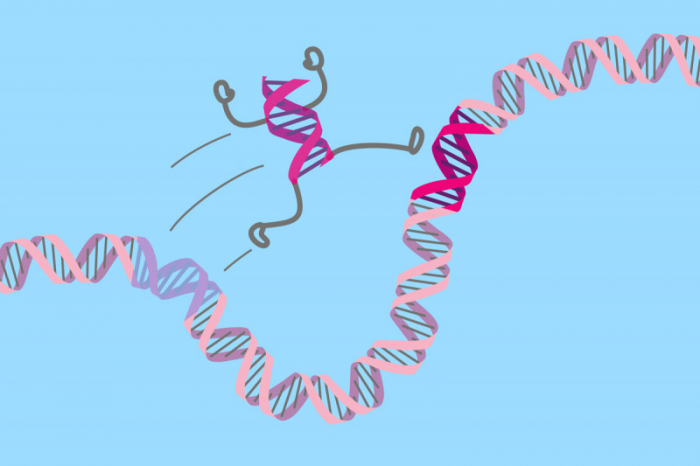 Only percent of human DNA codes for proteins, and approximately half of the rest of the genome is made up of what used to be called "junk" sequences that can copy themselves into RNA or DNA and jump from one location to another. Previous research led by investigators at Massachusetts General Hospital (MGH) had revealed a critical role for one of these jumping genes during times of stress.

In new research published by the same group in the Proceedings of the National Academy of Sciences, the investigators report a surprising new property of this jumping RNA.

The sequences that jump from place to place in the genome are more formally known as transposable elements, and their role in health and disease is not fully understood. But it has long been suspected that they are more than just parasitic elements without good function. In their original study, Jeannie Lee, MD, Ph.D., an investigator in the Department of Molecular Biology at MGH, and her colleagues found that one of these transposable elements—a very abundant, short interspersed nuclear element (SINE) called B2 in mice (ALU in humans)—makes an RNA that is cut when together with a protein called EZH2. However, at the time, they did not know how the RNA is cut. Researchers now make the striking discovery that B2 and ALU cut themselves.

Until four decades ago, it was thought that only proteins can make enzymes and that only enzymes can cut nucleic acids, the building blocks of DNA and RNA. But in 1982, researchers showed that RNA can function as enzymes as well—and these RNAs are called ribozymes—a discovery that led to the Nobel Prize in Chemistry in 1989. Today, 15 classes of ribozymes have been described, but they are mostly observed in bacteria and viruses. Very few are known in mammals such as humans, and their functions are mostly unclear.

Because B2 and ALU are so abundant in our cells, the Lee group's discovery puts a new twist to the ribozyme story. "B2 and ALU are present in hundreds of thousands of copies in our DNA and they become massively expressed during stress. This is a mind-boggling amount of ribozyme activity," said Lee. The team found that B2 and ALU are normally silent, but when subjected to heat or other forms of stress, they become activated. Also, their RNA-cutting activity is enhanced by an interaction with the EZH2 protein.

Lee noted that cells are continually challenged by stress, and a swift response can mean the difference between life and death. "Hinging the induction of stress-related genes to self-cutting RNAs seems highly adaptive," she said. "No new synthesis of gene products would be required and the critical event would instead be the recruitment of a protein factor, EZH2, that already exists inside cells and stands ready to be mobilized."

The findings may have important clinical implications for helping the body to respond to stress, such as during the development of infections, cancer or autoimmune disease.

Read the original article on phys.org.