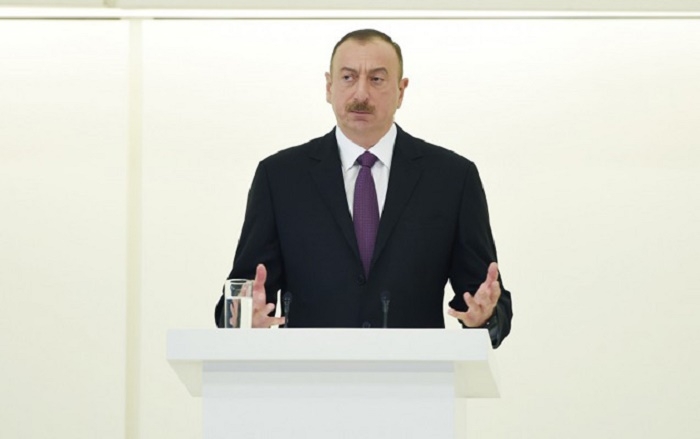 The Azerbaijani state pursues a large-scale and elaborate social security policy, Azerbaijani President Ilham Aliyev said Dec . 24 at the meeting with a group of martyr families and the Karabakh war disabled who were provided with apartments and cars, AzVision.az reports.

“It is a very significant day in your life today,” the Azerbaijani president said. “Today, families of martyrs and those handicapped in the Karabakh war will be provided with new apartments. Cars will be presented as well. I want to congratulate you on this occasion. It will be very comfortable to live in this beautiful building. I have reviewed the building. All the apartments are cozy, bright, beautiful and renovated. And this should be the case. You deserve it.”

“I have repeatedly said that the memory of those who have become martyrs in the name of the Motherland is always dear to us,” Ilham Aliyev noted. “The people of Azerbaijan always keep the memory of martyrs in their hearts. It is our moral duty to create conditions for those who participated in the war and became disabled.”

“In recent years, more than 7,500 apartments and houses and about 7,000 cars have been provided to families of martyrs and people disabled in the Karabakh war,” the Azerbaijani president added. “I can say that this happens very rarely in the world. I believe that Azerbaijan pursues the most correct policy in this area, because our policy is centered on the people of Azerbaijan – especially those who sacrificed their lives in the name of the Motherland and lost their health. This policy will be continued.”

“Next year, there are plans to provide at least 1,500 apartments and private houses, i.e. twice as much as this year although the initial plan at the beginning of this year was to provide about 800 apartments,” Ilham Aliyev said. “However, as a result of the allocation of additional funds, the number of these apartments and houses has reached 900. Hundreds of cars have been provided as well. Of course, living in such a beautiful building will be very pleasant. Once again, I want to say that you are well worth of it.”

“The Azerbaijani state pursues a large-scale and elaborate social security policy,” the Azerbaijani president added. “First of all, the families of martyrs, those handicapped and veterans of the Karabakh war are surrounded by state care and attention. At the same time, our compatriots affected by the occupation, internally displaced persons have been provided with 5,000 apartments and private houses this year. Thus, about 6,000 houses and apartments were provided to people of this category this year.”

“And this means that we have built houses in an amount equal to a city and provided them to citizens who are well worth of that,” said Ilham Aliyev. “I don’t know of any other country which would pay so much attention to this area. This shows again that our policy in this area is both elaborate and fair. This policy will be continued because there are still people in the line. Among martyr families, more than 2,000 people are still in the line. Their problems will be resolved in the next two to three years.”

“Our economic opportunities are improving now,” the Azerbaijani president noted. “Thanks to the implementation of correct economic policies, we have received additional incomes. We channeled these first of all into the solution of social problems. This year, over 4.2 million Azerbaijani citizens – more than 40 percent of our population – were covered by a large social package. Salaries, pensions, allowances, student scholarships, solution of problem loans – all this requires a lot of money. We channeled billions of manats into these matters and took the right step because it was necessary.”

“Social security is our top priority,” Ilham Aliyev added. “In order to achieve this, we must have economic opportunities. Therefore, the faster economic development takes place, the sooner social security will improve, salaries and pensions will increase. The reforms under way in our country today pursue this very goal. In order to achieve even greater success in the social sphere, we must first of all build our work in the economic sphere on the basis of the right principles. Transparency, fairness, fight against corruption and bribery, economic reforms, structural reforms – all this brings a great deal of excitement to our country.”

“Our economic performance this year is very positive,” the Azerbaijani president said. “All the additional incomes have been channeled into the social sphere. Clear evidence of this is the opening of this beautiful 96-apartment building today. I congratulate you on this wonderful event and wish you continued success, good health and happiness in the New Year.”