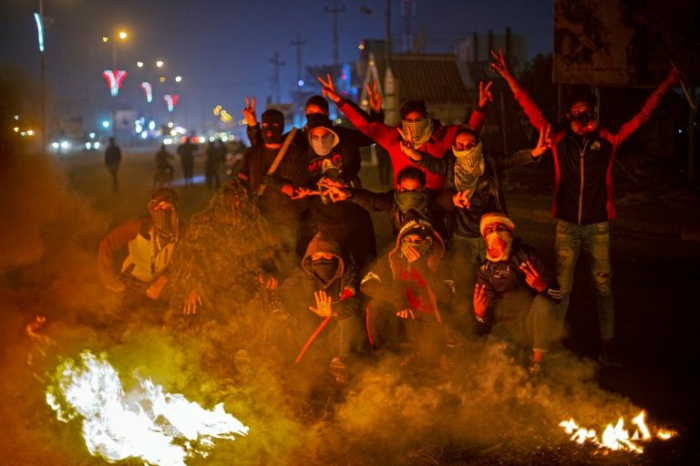 Hundreds of anti-government protesters marched Wednesday in southern Iraq to mourn a dead activist after a night during which the headquarters of two pro-Iran militias were set on fire, AFP reported.

The demonstrators oppose the political class that has run the oil-rich yet poverty-hit country since a 2003 US-led invasion overthrew dictator Saddam Hussein. They accuse leaders of enriching themselves and of being beholden to neighbour Iran.

Thaer al-Tayeb, a prominent activist from the city of Diwaniya, went to Baghdad's Tahrir Square, the epicentre of the unprecedented revolt shaking Iraq, when the rallies started nearly three months ago.

After Tayeb's death in hospital was announced Tuesday, crowds of demonstrators rushed to the two local headquarters of pro-Iran militias and torched them.

First they set fire to the building of the powerful Badr organisation, run by the parliamentary head of the pro-Iran paramilitaries, Hadi al-Ameri.

Then they torched the headquarters of Assaib Ahl al-Haq, a group whose head Qais al-Khazali is subject to sanctions by the United States, accused of "kidnapping, murder and torture".

Around 460 protesters have been killed since the start of the demonstrations in early October and 25,000 have been wounded.

Rallies have continued despite a campaign of intimidation that has included targeted killings and abductions of activists, which the United Nations blames on militias.

After dwindling in recent weeks following a string of killings, the protest campaign has rediscovered its vigour at a time when political factions are wrangling over a replacement for outgoing premier Adel Abdel Mahdi.

He quit in November in the face of the massive protests, and negotiations to fill his post have remained deadlocked since the latest in a series of deadlines expired at midnight on Sunday.