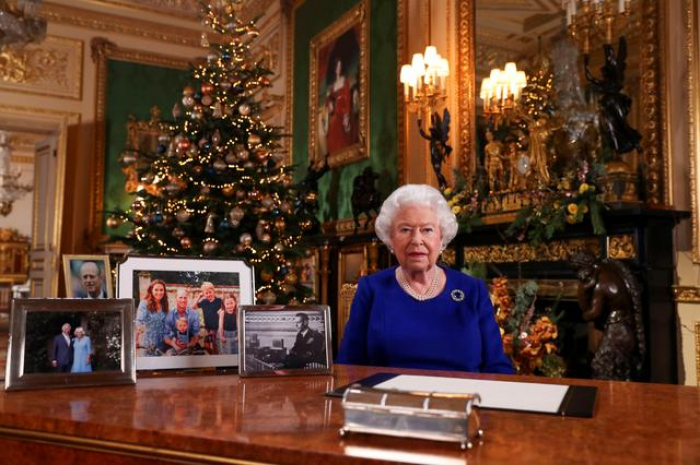 The royal family was out in force in a public show of Christmas unity as the Queen dwelt on the themes of friendship and reconciliation in her annual message and acknowledged a “quite bumpy” path during a turbulent year for both the monarchy and the nation, the Guardian reports.

The beleaguered Duke of York joined other members of the family for the traditional celebrations at Sandringham in Norfolk in his first appearance since he was forced to step down from official royal duties over his friendship with convicted sex offender, Jeffrey Epstein.

Hundreds of royal fans gathered outside St Mary Magdalene church on the royal estate to watch the royals arrive and depart the main 11am service. The Queen was driven the short distance to the church, accompanied by the Duchess of Cornwall.

Prince Andrew did not attend that 11am service. But before the crowds were allowed in, he was seen walking side by side with his brother Prince Charles to an earlier private 9am service also attended by the Queen and other royals. Andrew’s presence was clear acknowledgement of his family’s firm support following his catastrophic TV interview with Emily Maitlis, and that while he may have withdrawn from public life for the foreseeable future, he very much retains his position as a senior member of the royal family.

Andrew is understood to have made the personal decision to stay with his father while others attended church. Prince Philip, 98, who was discharged from hospital on Christmas Eve after a four-night stay for treatment for an undisclosed “pre-existing condition”, remained at Sandringham House where the royals would later have Christmas lunch.

Andrew’s decision not to attend the main service ensured that the royal family was able to focus attention on images of the Cambridges, attending the Christmas Day service for the first time with their two eldest children, Prince George, six, and Princess Charlotte, four. Before the service, the couple released a new image, showing William with George, Charlotte, and little brother Louis, and taken by Kate at the couple’s Norfolk home, Anmer Hall, earlier this year. After the service, George and Charlotte met members of the crowd, with Charlotte being given a doll by one well wisher.

The Duke and Duchess of Sussex, and their seven-month-old son, Archie, were absent from the royal festivities, having chosen to spend Christmas at a secret location in Canada with Doria Ragland, Meghan’s mother.

It has been a tumultuous year for the royals, starting with controversy after Prince Philip was involved in a vehicular collision in which two women were injured, and ending with Andrew’s TV interview on his friendship with Epstein, and his denials over allegations he had sex with one of Epstein’s victims, Virginia Roberts, when she was aged 17.

The year also saw the Queen drawn into a constitutional crisis by Boris Johnson over the prorogation of parliament, Meghan’s admission she was struggling with royal life, and Harry appearing to confirm reports the royal brothers were “now on different paths”. The Sussexes are also taking on the press over privacy.

The Queen did not address any of these issues directly in her 68th Christmas broadcast. Rather she cited the example of Jesus, and “how small steps taken in faith and in hope” could often overcome “long-held differences”.

She added: “The path, of course, is not always smooth, and may at times this year have felt quite bumpy, but small steps can make a world of difference.” Her words will be interpreted as an oblique reference to the difficulties her family faced in 2019, as well as the dominant issues of Brexit, a general election and political turmoil endured by the nation.

She acknowledged how young people, who have been inspired by the Swedish schoolgirl activist Greta Thunberg, were taking action on the climate crisis. “The challenges many people face today may be different to those once faced by my generation, but I have been struck by how new generations have brought a similar sense of purpose to issues such as protecting our environment and our climate.”

On a more positive note, she spoke of the birth of baby Archie, as viewers were shown a photograph of him taken shortly after his birth in May. “Two hundred years on from the birth of my great-great grandmother, Queen Victoria, Prince Philip and I have been delighted to welcome our eighth great-grandchild into our family,” she said.

She also reflected on the 75th anniversary of the D-Day landings, and the official ceremonies attended by world leaders, including US president, Donald Trump, the German chancellor, Angela Merkel, and the French president, Emmanuel Macron.

In what will be seen as a comment on Brexit, she spoke of the commemorations of that decisive battle, and seeing “those who had formerly been sworn enemies” coming together and “putting past differences behind them”. She added: “By being willing to put past differences behind us and move forward together, we honour the freedom and democracy once won for us at so great a cost.”

Reflecting on memories of watching Neil Armstrong’s moon landing 50 years ago , she gave his immortal words a fresh equality twist, describing the moment as “a small step for man and a giant leap for mankind – and, indeed, for womankind”. Giant leaps often started with small steps, she stressed.

The pre-recorded broadcast, filmed last week in the green drawing room at Windsor Castle before Philip was helicoptered from Norfolk to the private King Edward VII hospital in London, is likely to have been the most difficult since her “annus horribilis” in 1992. That year saw the break up of three royal marriages, and the row over who would pay for restorations after the Windsor Castle fire.

Photographs chosen to adorn her table included one of her father, George VI. Ahead of Christmas, footage was released of the Queen, Charles, William and George stirring Christmas puddings in Buckingham Palace for the Royal British Legion. The image of a queen and three future kings clearly portrayed the shape of the monarchy ahead as the royal family sees it.