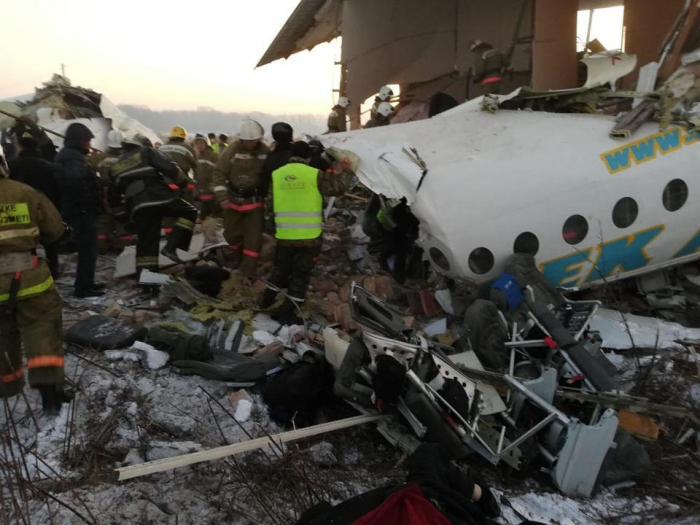 "Those were mainly passengers who were in the nose [of the aircraft]. A total of 12 people were killed in the accident, eight of them died at the scene, two people died in the hospital and two others at Almaty airport," he said.

According to Sklyar, 49 people were hospitalized, 18 of them are in critical condition. Earlier reports said that the death toll had climbed to 15.

He added that the runway at the airport was in perfect condition during takeoff.

There were 95 passengers and five crewmembers onboard the plane.​​​

The Bek Air plane en route from Almaty to Nur-Sultan crashed shortly after takeoff outside the Almaty airport early Friday. The plane lost altitude and crashed into a concrete structure.

A Kazakhstan plane with 100 people aboard crashed shortly after takeoff early Friday, killing at least 14 people while at least 35 others survived with injuries, officials in Almaty said, AzVision.az reports citing AP.

The Bek Air aircraft hit a concrete fence and a two-story building after takeoff from Almaty International Airport. It said the plane lost attitude at 7:22 a.m. (0122 GMT).

In a statement on its Facebook page, the airport said there was no fire and a rescue operation got underway immediately following the crash.

The plane was flying to Nur-Sultan, the country’s capital formerly known as Astana.

The aircraft was identified as a Fokker-100, a medium-sized, twin-turbofan jet airliner. The company manufacturing the aircraft went bankrupt in 1996 and the production of the Fokker-100 stopped the following year.

The crash occurred near the Kazakh city of Almaty. The city airport said in a Facebook post some people have survived the accident.

A plane belonging to Bek Air company with 100 people aboard has crashed near the city of Almaty, Kazakhstan, the city airport reported on Friday.

At least nine people died in the crash, the authorities said.

"According to preliminary information, nine people have died, nine more have been injured, including six children", the Ministry of Industry and Infrastructure said in a statement. The authorities initially reported that at least seven people had been killed in the incident.

According to the ministry, the aircraft lost altitude after take-off and crashed into a two-story building at 7:22 a.m. local time (01:22 GMT).

There were 95 passengers and 5 crew members on board.

The plane was travelling from Almaty to the Kazakh capital Nur-Sultan but disappeared from radars.

There is no fire at the scene. Rescue, medical and law enforcement services are working at the site.

Photos and videos from the scene have been shared on social media.

The Kazakh government has created a special commission to investigate the incident and suspended flights of Fokker-100 planes following the crash.

"The commission is heading for the crash site. All the details and causes [of the crash] will be found. Until the circumstances of the incident are clarified, all flights of planes of this type will be suspended", Kazakhstan's Ministry of Industry and Infrastructural Development added.
The Bek Air airline uses Fokker-100 planes for flights from Almaty to Nur-Sultan.

The plane crashed in a residential area, people are being evacuated.

The president of Kazakhstan has expressed condolences to the families of the victims and vowed to punish those guilty.