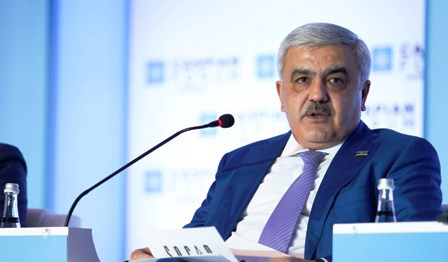 The total oil production at Azerbaijan's Azeri-Chirag-Gunashli (ACG) block of fields has reached 500 million tons since the start of its development, President of Azerbaijan's State Oil Company SOCAR Rovnag Abdullayev said at an event dedicated to the results of 2019 held on Dec. 29.

The event was attended by representatives of the SOCAR leadership, heads of departments and enterprises, as well as a group of oil workers awarded in accordance with the head of state's order on the eve of Oilman's Day and the 70th anniversary of the Oil Rocks, AzVision.az reports citing Trend.

SOCAR President Rovnag Abdullayev spoke about the results of the outgoing year, projects successfully completed by the company in Azerbaijan and abroad, such as the Trans-Anatolian Gas Pipeline (TANAP), SOCAR Polymer and Carbamide plants. He stressed the company's prospects in the coming years, noting that SOCAR is actively involved in processes of socio-economic development in Azerbaijan.

Abdullayev also noted that the extensive reforms, covering all spheres of the country's life, opens up new horizons for SOCAR, and increasing business sustainability and digitalization of production processes is one of the main tasks of the company.

The company intends to increase labor efficiency not only by increasing the number of employees, but also through the use of technology.

The contract for developing the ACG field was signed in 1994. A ceremony to sign a new contract on development of the ACG block of oil and gas fields was held in Baku Sept. 14, 2017.