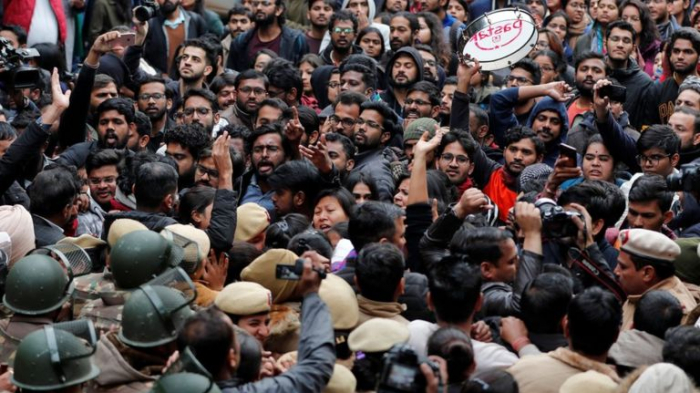 Students across India have begun protesting against an attack on a prestigious Delhi university by masked men wielding sticks on Sunday.

At least 40 students and staff of the Jawaharlal Nehru University (JNU) were admitted to hospital with injuries.

Videos of the violence quickly spread via WhatsApp and were then broadcast on television, sparking shock and outrage.

Protests are taking place in the cities of Chandigarh, Bangalore, Mumbai and Hyderabad as well as the capital Delhi.

Police have begun a probe and say they have identified some of the assailants.

The violence has been condemned across the board, including by defence minister Nirmala Sitharaman and foreign minister S Jaishankar - both of whom are alumni of the university.

What are students saying?

Protests have begun in a number of cities, with students speaking out strongly against the attack.

In Panjab university in the northern city of Chandigarh, students said that authorities had not acted swiftly enough.

"JNU has seen protests against the hostel fee hike for months now. Those protesters were detained many times and even sent to jail. But now the police is just silent about this incident - this shows us who is responsible," Kanupriya, one of the protesters in Chandigarh, told BBC Punjabi.

The cause of the attack is still unclear. But the JNU student union blamed Sunday's violence on the Akhil Bharatiya Vidyarthi Parishad (ABVP), a right-wing student body linked to India's governing Bharatiya Janata Party (BJP).

But the head of the ABVP, Durgesh Kumar, said its members were the real victims - he said some of them had been injured as well.

"These goons are roaming around the campus fearlessly with batons and weapons and wearing masks. They are beating up the students of ABVP and then they are acting innocent and saying that ABVP people started the ruckus. The opposition is on their side in their manufacturing of stories. Left-leaning people are trying to defame this campus. They want to transform this campus into Naxal (Maoist rebel) camps," he told BBC Hindi.

In the southern city of Bangalore, protesters included alumni of the university, who said something like this had never happened at JNU until now.

Maliga Sirimane, an activist present at the protest said, "JNU has been the inspiration for many struggles across the country. This is not only because it is an exemplary university, but also because of the spirit of struggle that it has even though its students have faced many atrocities."

Students from two prominent universities in Kolkata (formerly Calcutta) have also taken out a march. "Yesterday (Sunday) was the darkest day of Indian democracy because of what happened inside the JNU campus," one protester was quoted as saying by the PTI news agency.

What happened on Sunday at JNU?

The attack is believed to have begun close to 7pm local time (13:30 GMT) on Sunday, when a group comprising masked men and at least one woman, began attacking students. They were armed with stones, sticks and iron rods, according to students' accounts.

"These were not small stones, these were big stones that could have broken our skulls," Professor Atul Sood told NDTV. "I fell on the side and when I got up, I saw cars completely vandalised, including my car."

Videos of the incident showed the campus in disarray, with broken glass and chairs flung about in some places. One video even showed the student union president bleeding from a head wound. She said she had been attacked by masked men.

Professor Sood said about 50 teachers and 200 students had been holding a meeting on the campus when the attack began.

What do we know about the attack?

The cause of the attack and who was behind it is still unclear.

Students opposed to a hike in hostel fees have been protesting on campus against the move for the past few months. They say they had gathered for a meeting on Sunday when they were attacked. They told the BBC the ABVP was responsible for the violence.

The university initially released a statement informing students that "armed miscreants" were "roaming around, damaging property and attacking people".

It later released another statement in which it blamed a "group of students" who were opposing an ongoing admission process to register new students. It is widely believed that the statement referred to leftist students who have been protesting against the fee hike.

There were violent clashes at JNU last year over the rise in hostel fees.

What is happening now?

The atmosphere at the campus is still tense, reports the BBC's Vikas Pandey, who is at JNU.

"Students are really worried about their future. They fear more attacks. The fear is such that many of them refused to talk on camera, fearing reprisals," he said.

Students have also said they will take out rallies against the violence on Monday. A group of them also protested against police "inaction" on Sunday night, alleging that it took them hours to get to the campus.

The attack at JNU has also struck a nerve because several universities and cities have, in recent weeks, been seeing anti-government protests over a controversial citizenship law.

Some of the protests led to violence on campuses, and allegations of police using excessive force.

Now, further protests in support of JNU are being planned in several cities. In the financial capital, Mumbai, university students will continue a protest against the incident at the Gateway of India monument. They had gathered there by midnight.

Protests have also been announced by students at Jamia Millia Islamia university in Delhi, and Aligarh Muslim University in Uttar Pradesh state.

Demonstrations are also expected in the cities of Hyderabad, Chennai (formerly Madras), Ahmedabad and Chandigarh.