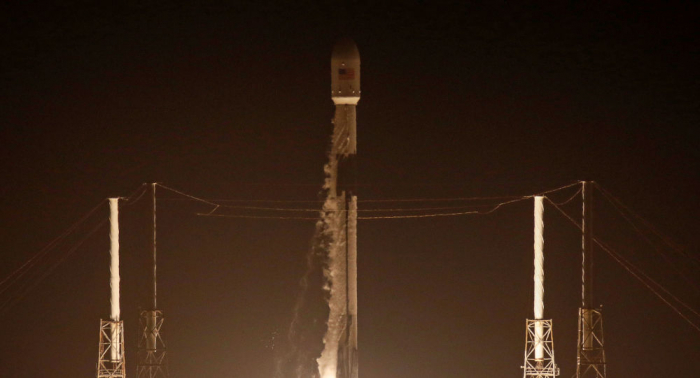 Elon Musk's SpaceX launched 60 new Starlink internet satellites to join its amassing megaconstellation in orbit, which was streamed live on Monday. The first batch has already been spotted across the globe, including in the UK, Sputnik reports.

SpaceX will become the world's largest private satellite operator after the planned nighttime launch of its Falcon 9 rocket from Cape Canaveral Air Force Station in Florida on Monday.

The company livestreamed the launch of two loads of 60 Starlink satellites - one of which is experimental, and the other operational.

After the launch, SpaceX will have a constellation of almost 180 satellites in low-Earth orbit, making the company both the world's largest private satellite operator, beating Planet Labs, as well as the largest currently active private launch company.

If the launch is successful, it will be just the first of 20 Starlink launches this year as SpaceX plans to construct a constellation of satellites in low-Earth orbit which will be able to provide Internet service for the whole world.

The SpaceX network may even kick-off by offering "bumpy" service to certain customers during 2020.

The constellation is potentially lucrative, seeing SpaceX surge above OneWeb and other companies looking to construct a low-latency Internet for earth from space.

If the firm can accumulate just 3 percent of the world's Internet market, it could see a return of around $30 billion in revenue.

Monday night's launch utilized the thrice-tested Falcon 9. Following the launch, the first stage fell to earth and landed on the “Of Course I Still Love You” droneship located in the Atlantic Ocean.

A payload fairing half, which is both trackable and reusable, is planned to be collected by another vessel, “Ms. Tree.”

The Starlink satellites themselves will be deployed at 61 minutes, at 290km altitude.

SpaceX has had to work alongside the Air Force's 18th Space Control Squadron to track its Starlink satellites to ensure that no collisions with existing satellites currently in orbit occur.

It has also faced criticism from astronomers and advocates of clear dark skies claiming that the company is polluting the sky.

SpaceX has assured skeptics that it will take measures to make the satellites less visible and that they will not disrupt nighttime skies.