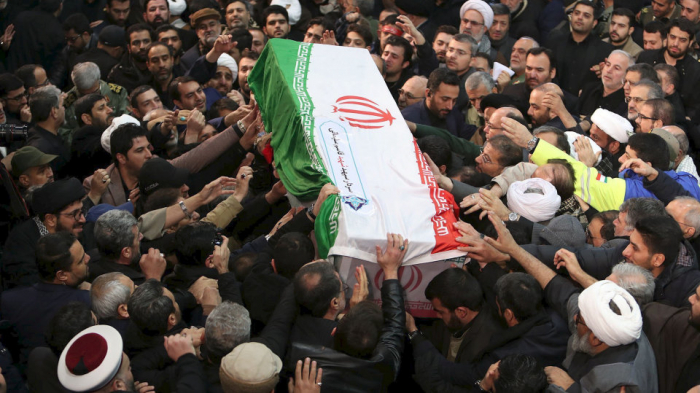 At least 35 people have been killed in a stampede as Iranians flocked to the burial of a top commander killed in a US drone strike, Iranian media report.

The deaths led to the postponement of Qasem Soleimani's burial. A new time will be announced later, officials say.

Soleimani is being laid to rest in his hometown of Kerman with millions already estimated to have packed the streets for funeral processions.

His killing has raised fears of a conflict between the US and Iran.

Soleimani was widely considered the second most powerful man in Iran behind Supreme Leader Khamenei. The US saw him as a terrorist and a threat to American troops.

President Trump adopted a tough stance against Iran after his election and Tehran responded with their own campaign. Tensions were raised further last month after the US attacked an Iranian-backed militia in Iraq it blamed for attacks on US forces.

It is unclear what caused the stampede in Kerman, south-eastern Iran, but vast numbers of people were in the streets ahead of Soleimani's planned burial.

More than 48 others were injured, state media reported. Soleimani had been due to be buried on Tuesday morning.

Iranian parliamentarians have approved a motion designating the US Army and the Pentagon as terrorist organisations. It has also allocated extra funds for the force once headed by Soleimani
Soleimani's burial saw top Iranian officials renew their threats of revenge.

The Guards were set up to defend Iran's Islamic system and are a major political and military force.

Mourners chanted "death to America" and "death to Trump", reporters there said.

"He [Soleimani] was seen as a great man who was ready to serve his people... He must certainly be avenged," an 18-year-old student who was there told the AFP news agency.

On Monday, Ayatollah Khamenei led prayers at Soleimani's funeral in Tehran, at one point weeping over his coffin.

Unconfirmed estimates from Iranian state television put the number who took to the streets of Iran's capital alone as "millions". The crowds were large enough they could be seen in satellite images.