Trump: U.S. does not have to use military against Iran 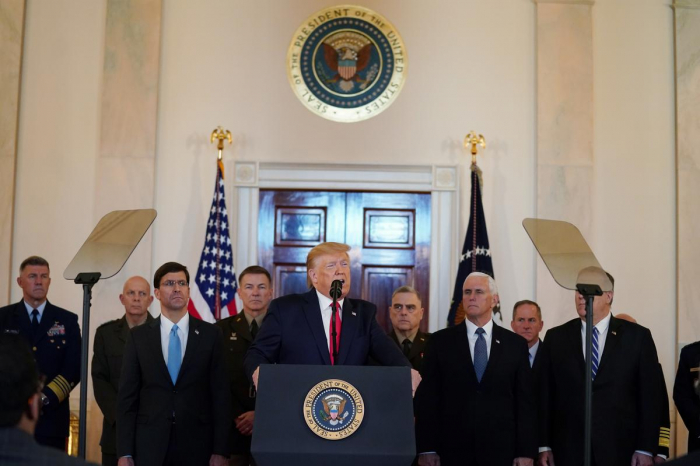 President Donald Trump said on Wednesday the United States did not necessarily have to use its military power against Iran, in an apparent attempt to defuse a crisis over the American killing of Iranian military commander Qassem Soleimani, AzVision.az reports citing Reuters.

In an address from the White House, Trump said no Americans were harmed in Iranian missile attacks on military bases housing U.S. troops in Iraq and suggested Washington might not carry out immediate retaliation.

“Our great American forces are prepared for anything. Iran appears to be standing down, which is a good thing for all parties concerned and a very good thing for the world,” he said.

Trump stopped short of making any direct threat of military action against Iran but said the United States “will immediately impose additional punishing economic sanctions on the Iranian regime” in response to what he called “Iranian aggression.”

He offered no specific measures.

Iranian forces fired missiles at military bases housing U.S. troops in Iraq on Wednesday in retaliation for the killing of Iranian general Soleimani, raising the stakes in its conflict with Washington amid concern about a wider war in the Middle East.

Iranian Supreme Leader Ayatollah Ali Khamenei, addressing a gathering of Iranians chanting “Death to America”, said the attacks were a “slap on the face” of the United States and said U.S. troops should leave the region.

Iran’s foreign minister said Tehran took “proportionate measures” in self-defense and did not seek to escalate the confrontation.

Trump again vowed that he would not allow Iran to obtain a nuclear weapon and urged world powers including Russia and China to abandon the 2015 nuclear accord with Iran and work toward a new agreement.

“We must all work together toward making a deal with Iran that makes the world a safer and more peaceful place,” he said.