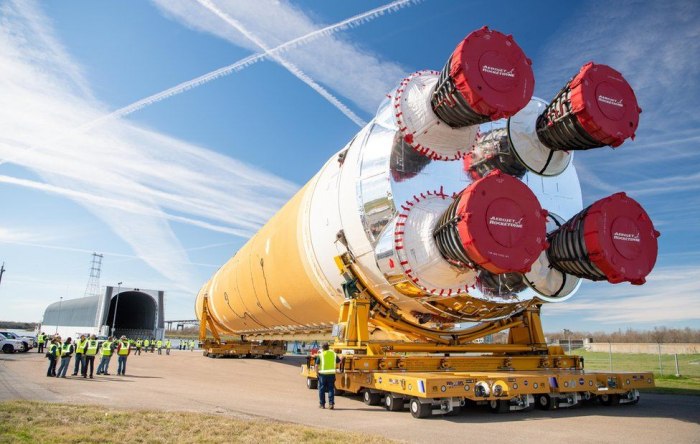 The first core stage for Nasa's "mega-rocket", the SLS, has left its factory in New Orleans for crucial tests to assess its readiness for launch.

The Space Launch System (SLS) is a critical part of the space agency's Artemis programme, which aims to return Americans to the Moon by 2024.

The core stage is the centrepiece of the new rocket and will undergo comprehensive testing in Mississippi.

On Wednesday, it was placed on a barge which will sail it to its destination.

The rocket, which will be taller than a 30-storey building, is being built for Nasa by Boeing.

Nasa deputy administrator Jim Morhard attended the roll-out of the rocket stage from the Michoud Assembly Facility (Maf) in New Orleans where it was built. 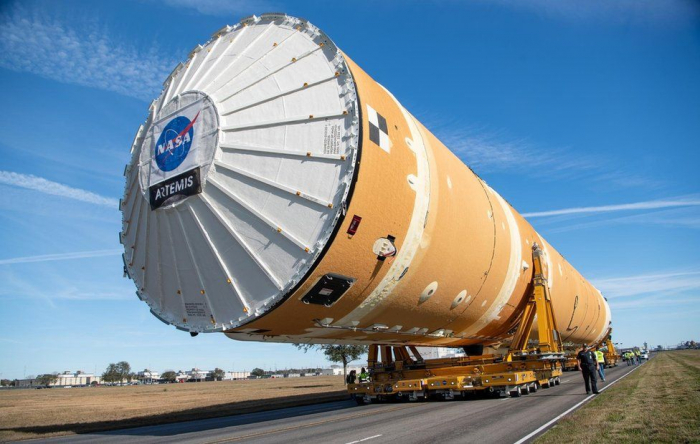 He said it represented "an exciting leap forward in the Artemis program as Nasa teams make progress toward the launch pad".

The rocket programme, which was announced in 2010, has been hit by delays and cost overruns.

Some in the space community believe it would be better to launch deep space missions on commercial rockets. But supporters of the programme say that Nasa needs its own heavy-lift launch capability.

After roll-out from the Maf, the core was loaded on to Nasa's Pegasus barge to travel by water to the Stennis Space Center near Bay St Louis in Mississippi.

The test campaign at Stennis is called the "Green Run", and will involve operating all the core stage systems simultaneously for the first time.

This will see the four powerful RS-25 engines fired for about eight minutes (or perhaps a little less), and throttled at different settings. This will mimic the levels of thrust needed during launch.

The SLS core stage contains two propellant tanks - one to hold liquid oxygen and another for liquid hydrogen. Together, they hold a combined 733,000 gallons (2.7 million litres) of propellant to power the engines.

The SLS was designed to re-use technology originally developed for the space shuttle programme, which ran from 1981-2011. 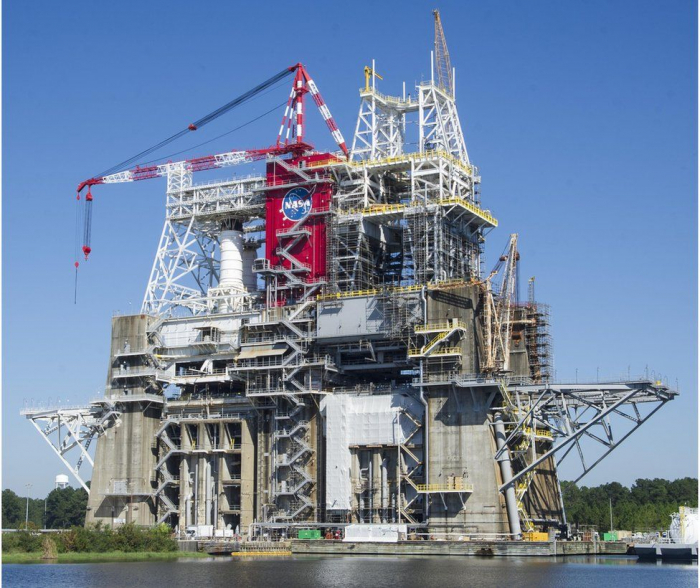 The RS-25 thrusters are the same ones that powered the orbiter, and the SLS core stage is based on the external tank that fed the shuttle engines with propellant (albeit with significant modifications).

Two solid rocket boosters (SRBs) - similar to those that helped launch the shuttle - will sit either side of the SLS core.

The rocket will provide the power required to send the Orion spacecraft - Nasa's next-generation crew vehicle - on its way to the Moon. The rocket's maiden launch (Artemis-1) is expected to occur some time in 2021.

Last year, John Shannon, who has been Boeing's head of the SLS programme since 2015, told me: "I suspect that once SLS is in the national capability, there won't be a need for another heavy-lift vehicle like it for many years. So this is really a once-in-a-generation opportunity."

The core is the largest stage Nasa has ever had built at the Louisiana factory, including the Saturn V rocket stages for the Apollo programme.

"This is a historic moment for Nasa's Artemis programme and a proud time for the... team as the first flight article leaves the factory floor," said Julie Bassler, the Nasa SLS Stages manager.

Meanwhile, Nasa and its partners have completed production of the Orion spacecraft for the first Artemis mission. It is currently undergoing final testing at the Plum Brook Station in Ohio.

For the Artemis-1 mission, Orion will be sent on a loop around the Moon to test the hardware in deep space. The spacecraft will carry no crew.

The first mission to carry crew will be Artemis-2, which should send four astronauts on a lunar flyby.

Artemis-3, which is being targeted for 2024, will see a man and a woman land at the lunar south pole - the first time astronauts will have travelled to the lunar surface since 1972.