Origin of mystery humming noises heard around the world, uncovered 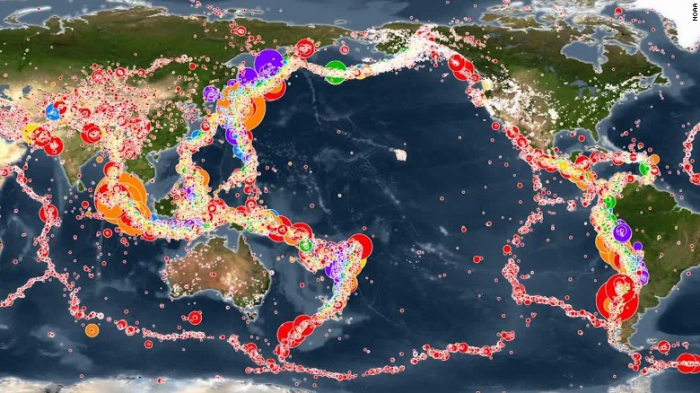 In 2018, a multitude of seismic signals were detected by earthquake monitoring agencies all over the world in May and June. They created a weird humming sound and some of the signals detected in November of that year had a duration of up to 20 minutes.

The signals and humming triggered "the curiosity of the scientific community," according to a new study that explains what happened: the formation of a new underwater volcano.

The unusual amount of earthquakes were traced to the island of Mayotte in the Indian Ocean, one of several in the Comoros archipelago found between Africa and Madagascar.

Scientists detected 7,000 tectonic earthquakes within the scope of the study. These kinds of earthquakes occur when Earth's tectonic plates become stuck as they move alongside one another. The pressure that allows them to move on causes earthquakes.

The most severe earthquakes reached a magnitude of 5.9 in May 2018.

They also encountered 407 long-period seismic signals. These Very Long Period signals, called VLPs, are harmonic and low, reminiscent of a double bass or large bell. And their 20- to 30-minute signals could be detected hundreds of miles away.

The earthquakes and signals were coming from about 22 miles off the eastern coast of the island. Researchers couldn't see any signs of volcanic activity in this area, but they suspected that magmatic processes may be forming one.

Unfortunately, there was no seismic network on this part of the ocean floor, meaning they were only able to get measurements from the island, Madagascar and Africa.

But they noticed a lowering of the island's surface by seven inches, indicating activity linked to the earthquakes.

New seismological methods developed by the researchers helped them piece together a year-long timeline to reconstruct what happened. Their study published this week in the journal Nature Geoscience.

The first phase involved magma rapidly rising from a reservoir in the mantle 18 miles below the Earth's surface. This opened a channel in the ocean floor, allowing the magma to flow and begin forming a new underwater volcano.

An oceanographic campaign in May 2019 showed that a volcano had formed in the same spot.
During the formation of the underwater volcano, earthquake activity dropped, and the ground of Mayotte lowered. Then, the VLP signals began.

"We interpret this as a sign of the collapse of the deep magma chamber off the coast of Mayotte," said Eleonora Rivalta, study co-author from the German Research Center for Geosciences GFZ. "It is the deepest and largest magma reservoir in the upper mantle to date, which is beginning to empty abruptly."

As dramatic as all of this sounds, it was hardly noticeable on the island itself. Mayotte is one of four volcanic islands in its archipelago and home to about 260,000 people, according to the study. It last erupted about 4,000 years ago.

"Since the seabed lies 3 kilometres below the water surface, almost nobody noticed the enormous eruption," said Torsten Dahm, study co-author and professor of geophysics and seismology at the University of Potsdam in Germany. "However, there are still possible hazards for the island of Mayotte today, as the Earth's crust above the deep reservoir could continue to collapse, triggering stronger earthquakes."