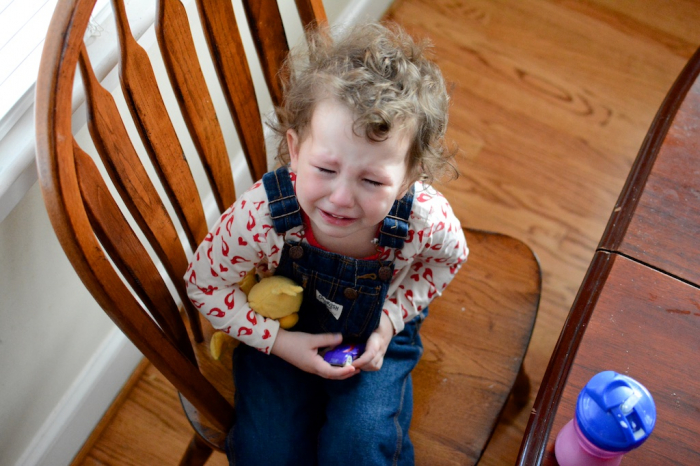 Every morning is a living nightmare.

Every morning I sigh deeply before entering my girls’ room, knowing that I will spend the next five to 35 minutes negotiating what the kids will wear. It could take five minutes if my children simply put on what we laid out the night before. Or, 35 minutes if my 3-year-old insists on wearing the dress she wore yesterday; she has no concept of time and “yesterday” could mean any moment in her living memory. Does she mean last week or last year? Does she still have this dress? Did it ever exist? Time is a flat circle.

Because this is nearly universal little-kid behaviour, I wanted to know: Why is getting children dressed such a nightmare, and when will the nightmare end? Though there isn’t much research that focuses specifically on toddler-parent clothing conflicts, the answers, according to our experts, are 1) because clothing is one of the few ways small children have to express their autonomy and 2) never. It will never end.

Toddlers go through a stage of development called “autonomy versus shame and doubt,” the second of eight stages of psychosocial development identified in the mid-1900s by a pioneering psychologist named Erik Erikson. Children at this stage are exploring the limits of their personal control, Erikson theorized. “It’s built into toddlers and preschoolers that they can be autonomous,” said Sally Beville Hunter, Ph.D., a clinical assistant professor at the University of Tennessee, Knoxville. “The problem is they’re not especially capable of rational decision-making.” If you don’t give children enough space for independence, they feel shame and begin to doubt their abilities.

This desire for children to express their autonomy frequently turns getting dressed into a pitched battle. “There are very few ways kids can establish independence or let you know their will when they’re very young, but they do have some control over what’s touching their bodies,” said Aaron E. Carroll, M.D., an NYT Parenting contributor and a professor of paediatrics at Indiana University School of Medicine. Babies will fight getting dressed, too, but that’s less a conscious play for autonomy, and more a reaction to being restrained, Dr. Carroll said.

With the toddler and preschool set, how do you respect their need for independence without getting sucked into a debate over a pair of tiny leggings?

Offer choices . You can encourage independence while still keeping their outfits seasonally appropriate by offering your kid two or three reasonable choices, said Dr. Hunter. If you let them fully dressed without input, you may end up with your 3-year-old waltzing out of her bedroom in a bathing suit and a pair of pink sparkle earmuffs when it’s 20 degrees outside.

Pick your battles.  This was the consensus of the three experts I spoke to. For example, if you have a child who will only wear skirts or dresses, and it’s snowing outside, don’t fight her on her preferences — you will lose. You can layout a few choices of warm dresses and pair them with heavy sweatpants or long johns, and shove the whole thing into a snowsuit.

As kids get older, the battles change, said Dr. Carroll, “but you have to give in.” That’s because clothing is such a marker of independence for kids, and also because they will soon outsmart you. They may wear whatever you’ve forced them to wear down to the corner but change it as soon as they’re out of sight. Allowing them control over their clothing may make them more likely to listen to you when you do make suggestions about their outfits, said Dr. Carroll, because you haven’t tried to curtail their independence.

Nudity is normal.  Lots of kids prefer being semi-naked at home, which is another thing that falls into the “pick your battles” category. Your kids should know that nudity isn’t acceptable in say, church, but is it really worth forcing your 2-year-old to put pants over his diaper in the living room? You can set boundaries on the nudity, though, by designating some period of time, perhaps after bath and before pajamas are put on, as “naked time,” said Dr. Hunter.

When to worry.  If the battles over clothing are daily, exhausting, prolonged and causing your family to avoid places or situations because the dysfunction is so extreme, it’s time to call your paediatrician, said Karen Hopkins, M.D., a clinical associate professor at N.Y.U. Langone who specializes in developmental and behavioural pediatrics.