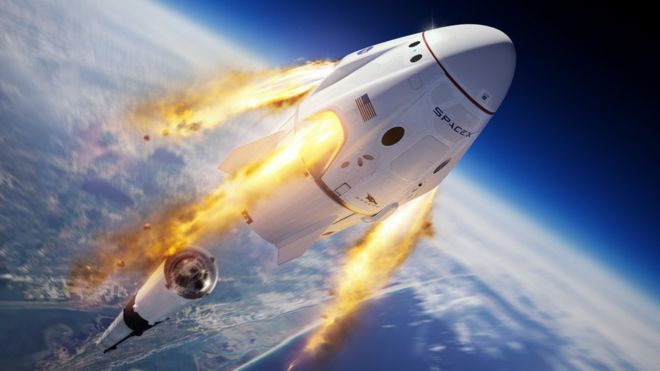 America aims to take another step on Sunday towards being able to send its own astronauts into orbit again, AzVision.az reports citing BBC News.

California's SpaceX company will practise what to do in the event that one of its rockets carrying a human crew fails shortly after lift-off.

If the test is completed successfully, it should clear the way for regular astronaut launches later this year.

The US has not launched from its own soil since the retirement of the space shuttles nine years ago.

It has been riding the Russian Soyuz system instead.

The US space agency (Nasa) has contracted both SpaceX and the aerospace giant Boeing to come up with home-grown alternatives.

SpaceX - with its Falcon rocket and Dragon capsule - is now in the final stages of development.

The test, to be conducted at Florida's Kennedy Space Center, will see a Falcon 9 rocket climb out over the Atlantic and accelerate to supersonic speeds.

Then, at a little over 80 seconds into the flight when the vehicle is travelling at almost twice the speed of sound, the engines will shut off.

Software will trigger the Dragon capsule riding atop the Falcon to fire its powerful SuperDraco thrusters to push the vessel to a safe distance.

Engineers expect the Dragon to continue on upwards, reaching an altitude of roughly 40km (25 miles) before dropping its lower service module structure, or trunk, and beginning the release of descent parachutes.

These should bring the capsule to a gentle splashdown roughly 30km offshore of Cape Canaveral, where a rescue team will be waiting to recover it.

Lift-off to touching the water should take about 10 minutes.

As for the rocket - it will be destroyed in the course of the demonstration.

"We expect that the Falcon will start to break up," said Benji Reed, director of crew mission management at SpaceX.

"Both stages (of the Falcon) are loaded with fuel because we want to have the right mass and do all the tests the right way. So with both stages loaded with fuel, we do expect there'll probably be some amount of ignition. Flame. We'll see something."

SpaceX has developed its rocket and capsule solution under Nasa's Commercial Crew Program.

Kathy Lueders, who manages this project, said the in-flight abort promised an exciting spectacle - the kind of "exciting" that her agency would prefer never to see.

"But this is a big test for us," she told reporters. "This is a test of a system that's supposed to protect our crews... a very important step in us making progress towards crew transportation to the International Space Station (ISS)."

No people will be aboard for this test; only a couple of anthropomorphic test devices ("dummies") to record on-board conditions. But if the demonstration passes off without incident, SpaceX ought to be able to move to crewed operations fairly quickly.

The company has already demonstrated an abort manoeuvre straight off the launch pad and has even conducted an end-to-end practice run to the International Space Station in which a dummy took the place of real people.

The importance of having an effective abort capability was underlined by the 2018 experience of Russian cosmonaut Alexey Ovchinin and Nasa flight engineer Nick Hague.

They were in the midst of a routine journey to the ISS when their Soyuz rocket damaged itself two minutes into the ascent. The men only escaped death because their capsule also had an emergency system to pull the crew compartment to safety.

It will be recalled that the Challenger space shuttle in 1986 had no such escape capability and all seven crew members died when the orbiter began to break up 72 seconds into its mission.

Both SpaceX and Boeing were scheduled to enter crewed service in 2017, but have had to grapple with - and overcome - some tricky technical challenges.

SpaceX saw one of its capsules explode on a testbed in April last year. And it has had to work hard recently to get the Dragon's parachute system performing to the specifications.

Likewise for Boeing. Just last month, the company's Starliner capsule failed to complete fully its own dummy run to the ISS.

The ship experienced an anomaly immediately after launch that led it to waste fuel reserves, leaving it short of the propellant necessary to reach the orbiting outpost.

All that said, it seems likely both SpaceX and Boeing will get to debut crewed flights in the coming months.