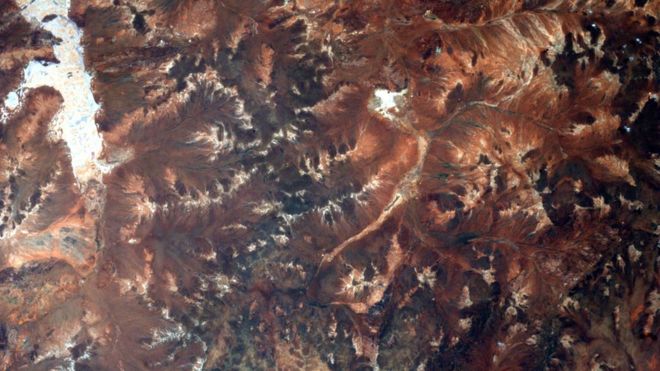 Scientists have identified the world's oldest asteroid crater in Australia, adding it may explain how the planet was lifted from an ice age.

The asteroid hit Yarrabubba in Western Australia about 2.2 billion years ago - making the crater about half the age of Earth, researchers say.

Their conclusion was reached by testing minerals found in rocks at the site.

The scientists say the find is exciting because it could account for a warming event during that era.

The Curtin University research was published in the journal Nature Communications on Wednesday.

How did they date it?

The crater was discovered in the dry outback in 1979, but geologists had not previously tested how old it was.

Due to billions of years of erosion, the crater is not visible to the eye. Scientists mapped scars in the area's magnetic field to determine its 70km (43 miles) diameter.

"The landscape is actually very flat because it's so old, but the rocks there are distinctive," researcher Prof Chris Kirkland told the BBC.

To determine when the asteroid hit Earth, the team examined tiny zircon and monazite crystals in the rocks. They were "shocked" in the strike and now can be read like "tree rings", Prof Kirkland said.

These crystals hold tiny amounts of uranium. Because uranium decays into lead at a consistent pace, the researchers were able to calculate how much time had passed.

It is at least 200 million years older than the next most ancient impact structure - the Vredefort Dome in South Africa.

"We were interested in the area because the Western Australian landscape is very old but we didn't expected [the crater] to be as old as this," Prof Kirkland said.

"It's absolutely possible that there's an older crater out there just waiting to be discovered, but the difficulty is in finding the crust before it erodes and you lose that early Earth history".

Could it have ended an ice age?

The timing of the impact could also explain why the world warmed around this time, according to the researchers.

Scientists believe the planet was previously in one of its "Snowball Earth" periods, when it was largely covered in ice. At some point, the ice sheets melted and the planet began to rapidly warm.

"The age of the [crater] corresponds pretty precisely with the end of a potential global glacial period," Prof Kirkland said.

"So the impact may have had significant changes to our planetary climate."

Using computer modelling, the team calculated that the asteroid struck a kilometres-thick ice sheet covering the Earth. The event would have released huge volumes of water vapour, a greenhouse gas, into the atmosphere.

This could have helped the planet's warming during the Proterozoic era - a stage when oxygen had just appeared in the atmosphere and complex life had not yet formed.

"Obviously we were very excited just with the age itself," Prof Kirkland said. "But placing that right with the context of Earth's other events makes it become really very interesting."

There is not enough modelling from the time to comprehensively test the theory, but "the rocks tell a story about the massive impact into the planet".

Another theory for the warming event is that volcanic eruptions may have pushed carbon dioxide into the atmosphere.