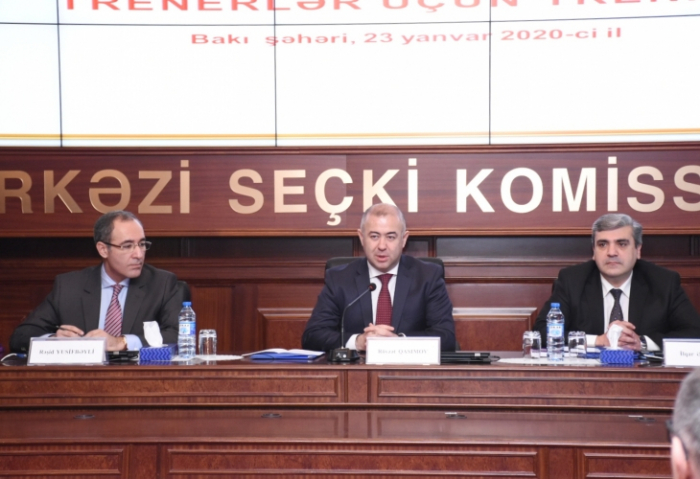 The next large-scale project envisaging training for lower election commissions has been launched today within the framework of the awareness program developed by the Central Election Commission (CEC), Chairman of the Commission Rovzat Gasimov told, secki-2020.az reports.

He said that a two-stage training project has been prepared for the elections to the Milli Majlis: “Starting from today, the first phase of the program titled "Training for Trainers" which is planned to be held in four consecutive days will be conducted by the CEC Training Group in the form of practical exercises using various visual and methodological tools. At this stage of the training, a total of 250 local trainers of the Constituency Election Commissions, with two representatives from each constituency will receive accurate and detailed information on all election day procedures, including preparation of polling stations for the voting, voting process, exceptional cases, vote counting and tabulation of official protocols on voting results”.

The CEC Deputy Chairman noted that the training project initiated by the CEC in cooperation with reputable international organizations was founded 18 years ago - in 2002: “Trainings, which have been improved in context and form since 2008, play an important role in enhancing the knowledge, skills and professional habits of constituency and precinct election commissions by regularly conducting all elections. During the training, the election day procedures, voting actions, and possible exceptional cases are presented to the participants by using visual aids, as well as, the topics covered during the practice sessions are discussed broadly and answered the arising questions”.

During the trainings, all participants will be provided with a CEC booklet "Election Day Guide", a sample of the protocol on voting results and a number of other necessary materials and resources to be used and become familiar with the trainings. The training project, which is extremely important to organize high-level, free and fair elections, cover more than 32,000 lower election commissions.

According to the deputy CEC chairman, the uniqueness of this training course is that it covers election processes and gives a special place to practice sessions: “A number of steps have been taken in accordance with the legislation regarding the exceptional cases that have emerged. On the other hand, the trainings are aimed at members of PECs in the form of small groups. We try to bring together 35-36 members of precinct election commission in each group. The goal here is to ensure that small groups are more interactive and involved in practical exercises.”