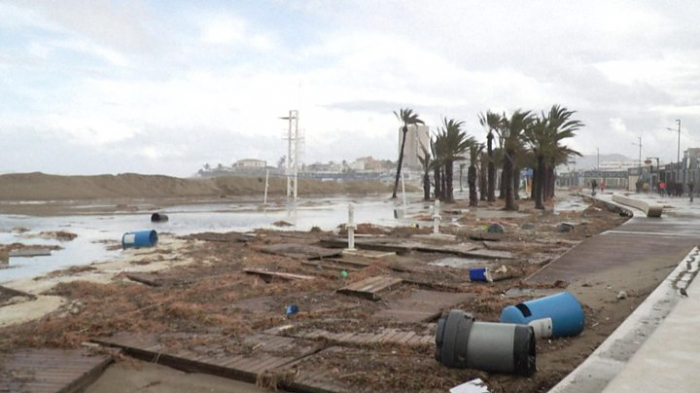 A violent storm that has ravaged parts of Spain with heavy rain and violent winds has left at least 13 people dead, AzVision.az reports citing BBC News.

On Thursday, Prime Minister Pedro Sanchez flew over some of the worst hit eastern areas and visited Majorca which has been battered by huge waves.

The government is to hold an emergency meeting on Friday to co-ordinate a response.

Mr Sanchez told reporters there would be "no scrimping on any resource or effort".

"I think what's important right now is that we're all united, that we work shoulder-to-shoulder and co-operate, as we are doing," he said.

Mr Sanchez said climate change had played a part in the severe storm.

"Meteorological phenomena we are witnessing aren't entirely due to climate change, but what is also true is that climate change is accentuating them," he told reporters.

Storm Gloria swept into the Balearic Islands - which include the holiday island of Majorca - last weekend with torrential rain whipped up by winds of 100km/h (62mph).

Huge waves forced some residents to evacuate their homes while rivers burst their banks and boats were torn from their moorings and washed on to beaches.

The storm then struck Catalonia, Valencia and the southern regions of Murcia and Andalusia with rain and snow, leaving a trail of damage in popular tourist resorts busy preparing for the holiday season.

Spanish media reported four storm-related deaths in Catalonia, five in Valencia and two in Andalusia with one in the central region of Castile and León and one in the northern region of Asturias.

Among those killed was a 50-year-old man who was washed away while fishing from rocks in Ametlla de Mar, Catalonia, and a 75-year-old woman whose house collapsed in Alcoi, Alicante.

On Thursday, emergency workers said they had found the body of a man drowned in his car in the Catalan town of Cabaces.

Authorities said the death toll could rise further with four people still missing in Catalonia and the Balearic Islands.

Conditions are easing as the storm passed over the country although several rivers in the north-east burst their banks on Thursday.