Iraq security forces clash with protesters in Baghdad, other cities 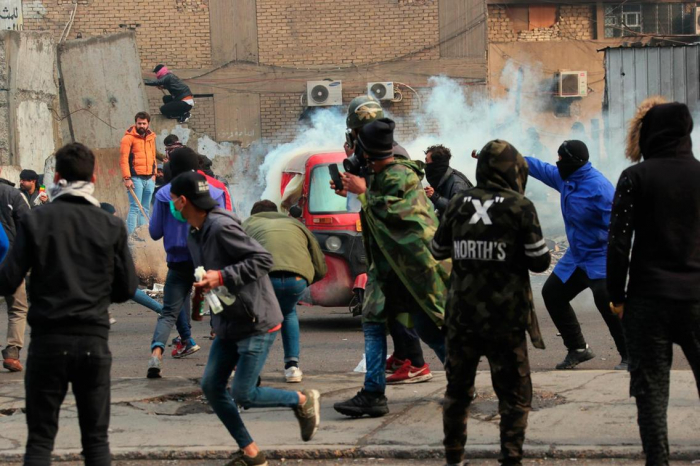 Iraqi security forces fired teargas and live bullets in renewed clashes with protesters in Baghdad and other cities on Sunday, a Reuters witness and security sources said, following a push to clear a sit-in camp in the heart of the capital, AzVision.az reports citing Reuters.

The authorities’ latest attempt to push back protesters and restore order came hours after populist cleric Moqtada al-Sadr, who has millions of supporters in Baghdad and the south, said on Saturday he would end his involvement in anti-government unrest.

At least 14 protesters were injured in the clashes in the capital, security and medical sources said, while unrest in the southern city of Nassiriya left at least 17 protesters wounded, four of them by live bullets.

“We protest because we have a cause, I don’t think Moqtada Sadr or any other politician will change our mind,” said a protester in Baghdad who declined to give his name.

Sadr’s supporters had bolstered the protesters and sometimes helped shield them from attacks by security forces and unidentified gunmen, but they began withdrawing from sit-in camps early on Saturday following his announcement.

Security forces then removed concrete barriers near Baghdad’s Tahrir Square, where demonstrators have camped out for months, and across at least one main bridge over the Tigris River.

“I don’t go to protests often but I came out today because of what they did yesterday, I want to express my solidarity with my brothers in Tahrir,” said Hussain Ali, a student.

Protesters in the capital were coughing and washing their faces and eyes to rid themselves of the effects of the gas while Iraqi Red Cross workers provided first aid, as the site was inaccessible to ambulances, a Reuters reporter said.