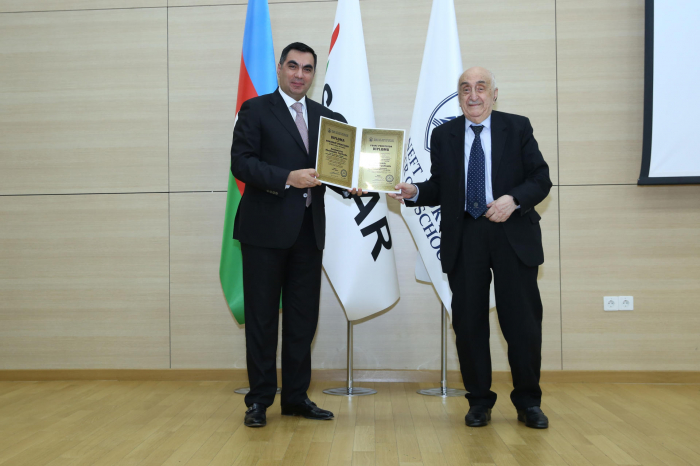 The 90th anniversary of SOCAR's First Vice-president, academician Khoshbakht Yusifzadeh – a living legend of Azerbaijan’s petroleum industry who has made a significant contribution to the development of this sphere – was widely celebrated at Baku Higher Oil School (BHOS).

A ceremonial event dedicated to this anniversary was held in the congress hall of Baku Higher Oil School. The event was attended by SOCAR and BHOS leaderships, prominent scientists and public members.

Speaking at the event, Rector of Baku Higher Oil School Elmar Gasimov noted that the huge contribution made by Khoshbakht Yusifzadeh to the successful implementation of the new oil strategy of independent Azerbaijan, as well as his rich experience serve as an example for all oil workers.

“The merits of academician Khoshbakht Yusifzadeh were recognized at the highest level. The 90th anniversary of the academician was solemnly celebrated at the state level in accordance with the decree of the President of the Republic of Azerbaijan Ilham Aliyev. Khoshbakht Yusifzadeh was awarded the Heydar Aliyev Order for his merits to the country. He has made an invaluable contribution to the exploration and development of rich oil and gas fields in our country, development of the oil industry and oil science, the successful implementation of large-scale geologic exploration activities in the Caspian Sea. Under his leadership and with his direct participation, 20 oil and gas condensate fields were discovered, including such fields as Bahar, Gunashli, Azeri, Chirag, Kapaz and others. In addition, as a scientist, Khoshbakht Yusifzadeh, who is known as the author of about 200 works, 18 monographs and 8 inventions included in the gold fund of the oil science of Azerbaijan, has made an invaluable contribution to the resolution of pressing problems of the petroleum industry, development of oil and gas geology, field development and the improvement of geophysical research methods. And today, Khoshbakht Yusifzadeh continues working as a scientist and specialist in the oil industry,“ the rector said.

After that, SOCAR’s Vice-president on Human Resources, Regime and Information Technologies Khalik Mammadov told the gathering about the historically significant achievements of academician Khoshbakht Yusifzadeh and shared his impressions of him as a colleague.

“While working with Khoshbakht Yusifzadeh, I witnessed how highly foreign experts regarded his opinion and how attentively and with great respect they listened to his advice and recommendations. Thanks to his efforts, large-scale exploration works, which have been carried out jointly with partner companies in the Azerbaijani sector of the Caspian Sea over the past 25 years, have always been crowned with success. Khoshbakht Yusifzadeh is still marching at the forefront of the glorious army of oil workers. He tirelessly works on the development of the petroleum industry of Azerbaijan and, as one of SOCAR’s leaders, continues to make a significant contribution to the economic prosperity of the country. We believe that, thanks to his inexhaustible energy and exceptional industriousness, our dear academician Khoshbakht Yusifzade will continue to work for many years in the name of a bright future for our people, taking a direct part in the development of our company,”Khalik Mammadov said.


In their speeches, the speakers noted that academician Khoshbakht Yusifzadeh is a well-known oil expert not only in Azerbaijan, but also abroad. They also emphasized that national leader Heydar Aliyev and President of the Republic of Azerbaijan Ilham Aliyev deeply respected Khoshbakht Yusifzadeh not only as a specialist well-known in Azerbaijan and in the post-Soviet space, but also as an internationally recognized expert.

After the speeches, a film was shown about academician Khoshbakht Yusifzadeh’s activities.

At the end of the event, the academician expressed gratitude to the organizers and participants of the jubilee.

Talking about interesting moments of his life and work, Khoshbakht Yusifzadeh noted the strong support, respect and care shown to him by the national leader Heydar Aliyev and his worthy successor, President Ilham Aliyev.