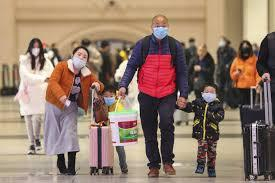 A family in the United Arab Emirates, arriving from China’s central city of Wuhan, has been diagnosed with a case of the new coronavirus, the health ministry said on Wednesday, AzVision.az with reference to Reuters reports.

It is the first known confirmed case in the UAE of a virus that has killed at least 132 people in China. The UAE is a major air transport hub with its Dubai International airport ranked the world’s third busiest, and the hub of Emirates airline.

It was not immediately clear how many people had been infected. The ministry of health and the government communications office did not immediately respond to a request for comment.

Those diagnosed with the virus were in stable condition and under medical observation, the ministry said in a statement carried by state news agency WAM.

The statement did not say where the family was being treated. The UAE is a country of seven emirates, though the majority of the population lives in Abu Dhabi and Dubai.

Chinese authorities have said the total number of deaths from the flu-like virus has risen by 26 to 132, while the number of confirmed cases has risen by 1,459 to a total of 5,974.

The number of cases in China now exceeds the 5,327 infected there with the Severe Acute Respiratory Syndrome (SARS) coronavirus that killed about 800 people worldwide in 2002-2003.

Major UAE airports in Dubai and Abu Dhabi last week said passengers arriving in China would be screened on arrival, a precaution taken by airports elsewhere.

Fears of the spreading virus have already pushed airlines to reduce flights to China. Emirates said on Wednesday its flights were operating normally.

Dubai’s DP World is among the companies worldwide that have restricted employee travel to China.