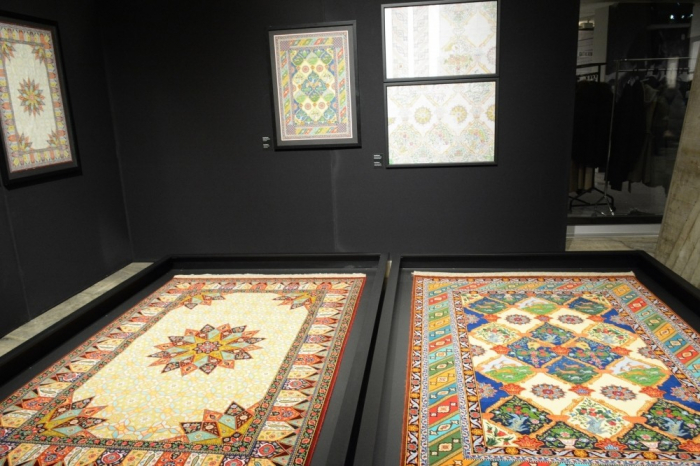 An exhibition titled “Undiscovered: New motives in Azerbaijan carpetry” has launched at the headquarters of UNESCO in Paris, with joint organizational support of the Heydar Aliyev Foundation, the Embassy of Azerbaijan in France, and Azerbaijan’s permanent representative office in UNESCO.

Executive Director of the Heydar Aliyev Foundation Anar Alakbarov, speaking at the opening ceremony, talked about the implementation of the exhibition titled “Undiscovered: New motives in Azerbaijan carpetry”. It was noted that 10 years earlier, the Azerbaijani carpet-making art was entered on the Representative List of UNESCO’s Intangible Cultural Heritage of the World, and at the 43rd Session of UNESCO World Heritage Committee in Baku, “The Historical Centre of Sheki, together with the Khan’s Palace” was entered on UNESCO’s World Heritage List. From this standpoint, the exhibition of Sheki carpets at UNESCO’s headquarters is of great importance. Anar Alakbarov thanked Director General of the organization Audrey Azoulay for the support provided for the organization of the exhibition at the headquarters of the organization.

Thereafter, UNESCO Director General’s assistant for cultural affairs Ernesto Ramirez, Azerbaijan’s Ambassador to France Rahman Mustafayev and head of the Permanent Delegation of Azerbaijan to UNESCO, Ambassador Anar Karimov spoke at the opening ceremony. In their speeches, the speakers thanked First Vice-President of Azerbaijan, President of the Heydar Aliyev Foundation Mehriban Aliyeva and the Heydar Aliyev Foundation for the organization of the exhibition.

It was mentioned that preservation of cultural heritage and passing it on to future generations is UNESCO’s mission. State representatives of Azerbaijan were thanked for the support they have provided to this mission of the entity.

Two of the carpet weavers whose carpets are displayed at the exhibition, as well as Philippe Juge who came to Azerbaijan and learned the art of carpet weaving, having inspired by the exhibition in Cannes, too participated in the exhibition. Philippe Juge expressed his satisfaction with the fact that the exhibition “Undiscovered: New motives in Azerbaijan carpetry” was held in the city of Cannes, of which he was a resident, saying that from the very moment he has been enchanted by the Azerbaijani carpets. It was brought to attention that his astonishment at Azerbaijani carpets made him visit the said exhibition every day. He said that, after repeatedly viewing the carpets displayed at the exhibition, he came to Azerbaijan and learned the art of carpet weaving from local carpet makers. After returning to Cannes, he installed a loom in his home, and has been weaving carpets for already two years. After the official part of the exhibition, attendees viewed the carpets, exchanging their views of the motifs and colours.

Azerbaijani artisans, and artist have created delicate and rich artworks, having inspired by the enigmatic ornaments and frescoes in the Sheki Khan’s Palace. The carpets being displayed at the exhibition were weaved by 30 artisans over the course of two years based on the sketches of these ornaments, and those by carpet-maker, People’s artist Eldar Mikayilzadeh.

This exhibition was first presented in 2019, within the days of Azerbaijani culture in the French city of Cannes, and it is expected that it will be demonstrated in a number of French cities over the course of this year.

The exhibition held at headquarters of UNESCO will continue to run until February 4. 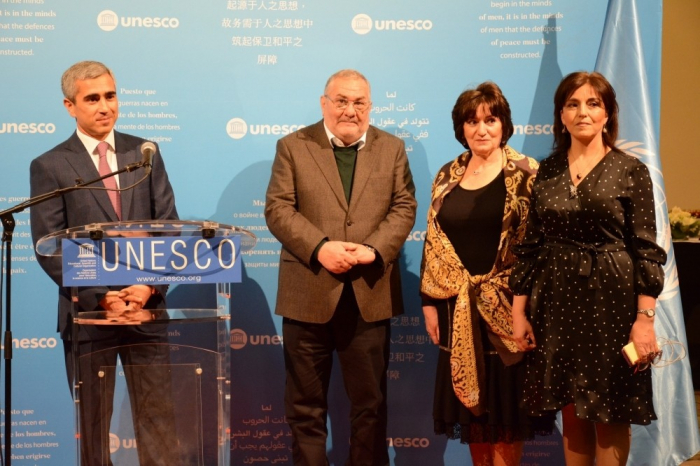 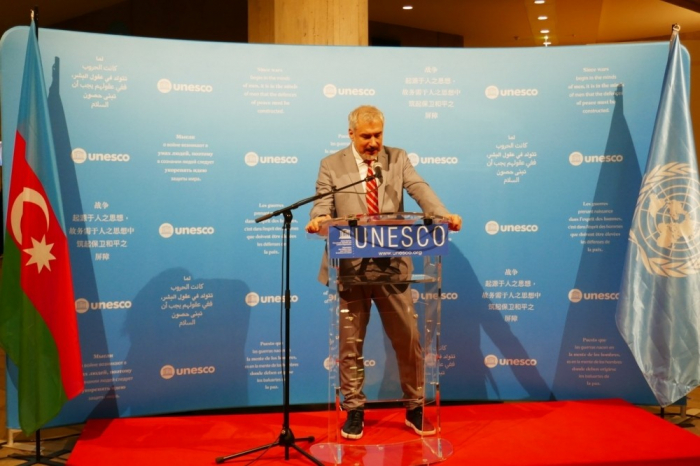 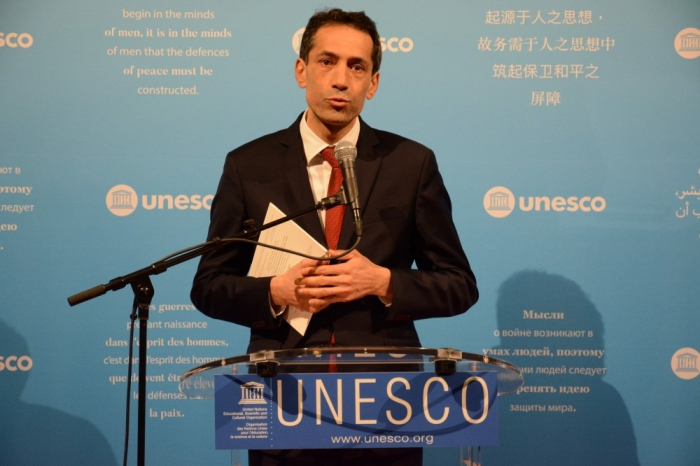 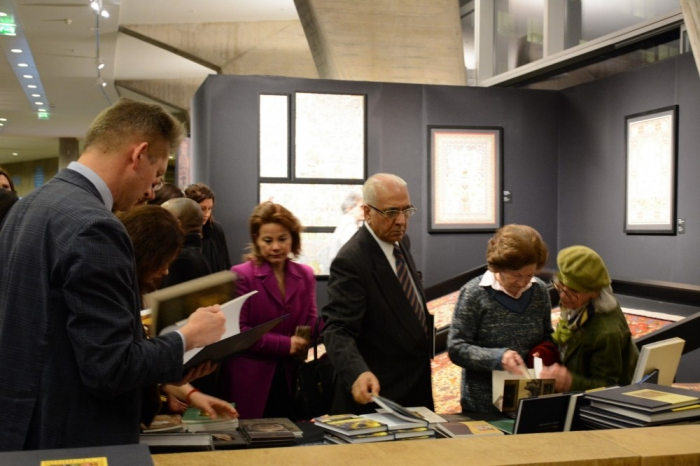 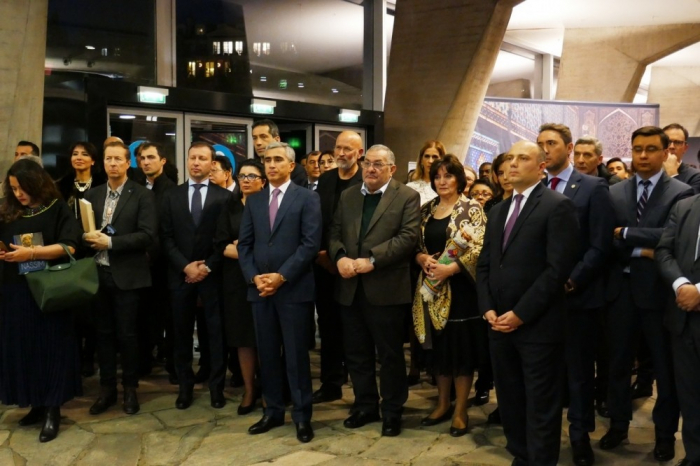 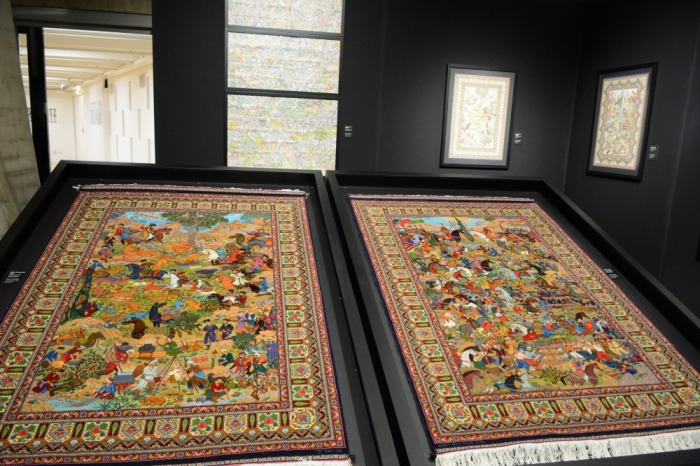 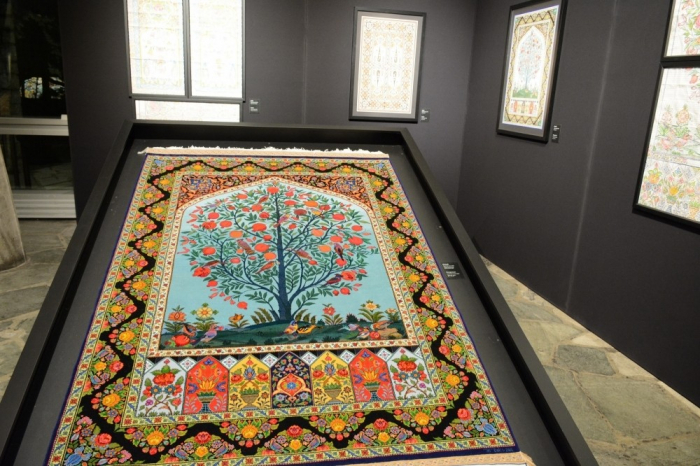 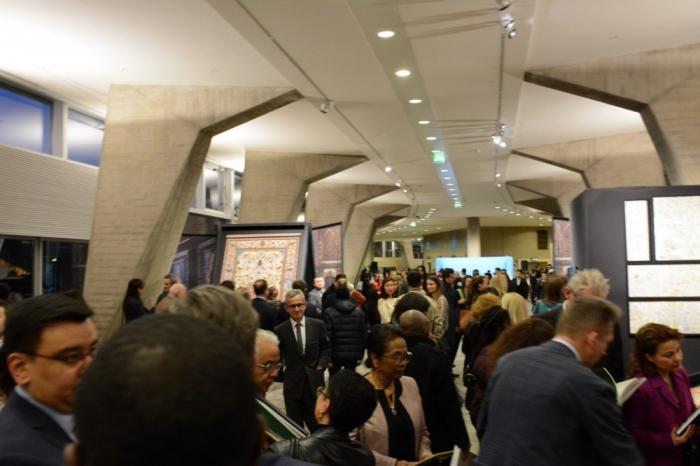