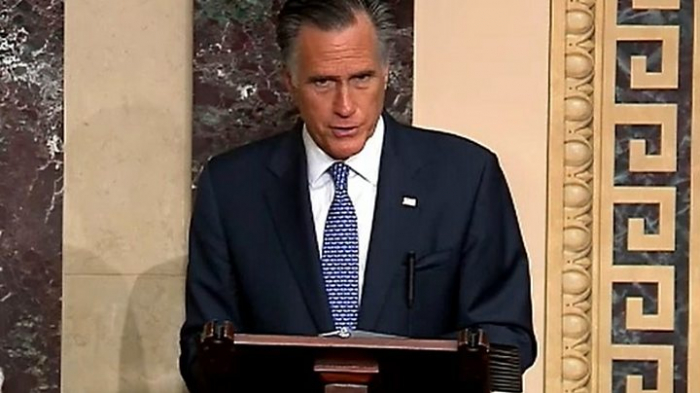 Mr Romney said the president was "guilty of an appalling abuse of public trust".

Not voting to convict him would "expose my character to history's rebuke", the senator said.

His remarks came before the chamber was expected to clear the president of the two impeachment charges against him.

In December, the Democratic-led House of Representatives charged Mr Trump with abuse of power and obstruction of Congress. He is accused of withholding military aide to press Ukraine for an investigation into Joe Biden, a Democratic rival, and obstructing congressional oversight.

Weeks of high drama subsequently unfolded as Democrats sought to convince members of the Republican-controlled Senate to convict Mr Trump and muster the two-thirds vote needed to remove him, though the prospect was dim from the beginning.

In the end, Mr Romney's centrist colleagues, Susan Collins of Maine and Lisa Murkowski of Alaska, said they would not defy the party.

Mr Romney said he would vote against Mr Trump on the abuse of power article, but not the obstruction charge.

He expected to face the wrath of the president and perhaps Republicans in his own state, the senator said, but his "inescapable conviction [was] that my oath before God demanded of me" a vote to convict.

"My vote will likely be in the minority in the Senate," Mr Romney added. "But... with my vote, I will tell my children and their children that I did my duty to the best of my ability, believing that my country expected it of me."

Minutes after Mr Romney's speech concluded, he was rebuked by Ronna McDaniel, his niece and chairwoman of the Republican national party.

"The bottom line is President Trump did nothing wrong, and the Republican Party is more united than ever behind him," Ms McDaniel tweeted.

On the Senate floor, Mr Romney expressed disappointment that his colleagues had chosen not to hear testimony from John Bolton, Mr Trump's former national security adviser, who is thought to have first-hand knowledge of the circumstances surrounding the Ukraine affair.

A manuscript of a forthcoming book by Mr Bolton reportedly claims Mr Trump told him to help pressure Ukraine.

The claim is the only time the president has been directly linked to the alleged scheme, but the Senate rejected a vote to hear from Mr Bolton as a witness.

Democrats, facing defeat in the trial, earlier suggested they could continue investigations against Mr Trump even if he is acquitted.

Mr Bolton could face questions beyond the impeachment articles, he said. If he testifies, "we're talking about everything," Mr Nadler told reporters.

Democrats in the House had previously sought Mr Bolton's testimony, but he declined to appear after the White House refused to allow any current or former aides to co-operate with the investigation.

Chris Van Hollen, a Maryland senator, said: "I don't think the House is interested at all in opening round two of impeachment.

"But I do think the country deserves the truth."

Val Demings, another House prosecutor, said Democrats would watch Wednesday's Senate vote and "make any decisions moving forward from there" about any subpoena for Mr Bolton.

Protests are expected to take place around the country on the final day of Mr Trump's trial.

A "Reject the Cover up Rally" is planned for Capitol Hill in the evening, as senators begin casting their votes.