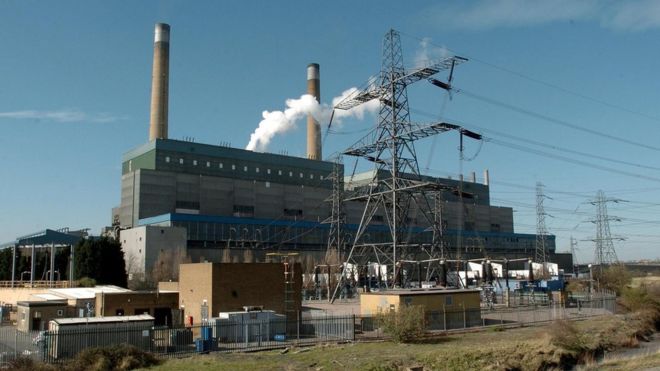 Breakthrough technologies such as carbon capture and hydrogen cannot be relied on to help the UK meet its climate change targets, a report says.

The government had hoped that both technologies would contribute to emissions reductions required by 2050.

But the report’s authors say ministers should assume that neither carbon capture and storage (CCS) nor hydrogen will be running "at scale" by 2050.

They say the government must start a debate on other, controversial steps.

These actions, which they say would need to be implemented in the near-term, include cutting down on flying and eating red meat.

UK law dictates that, by 2050, carbon emissions will be virtually halted, and any remaining emissions will have to be compensated for by activities such as tree planting.

Prime Minister Boris Johnson has regularly expressed the belief that technology would mostly solve the problem.

But the authors say that if new tech does emerge at scale by 2050, the government should treat it as a bonus, not an expectation.

Both of the new technologies in question have their supporters in politics and in industry.

CCS entails capturing CO2 emissions from power stations or industry, and burying them in rock formations or finding uses for the CO2. Both are expensive.

A few years ago, government economists predicted that gas plants equipped with CCS would be producing 30% of the UK’s clean electricity in the future. Nuclear and renewables would produce another 30% each.

Tom Burke, an expert on climate change, forecast at that time that only CCS could save the climate. When I reminded him yesterday, he admitted: “I was wrong”.

The equation radically changed because the nuclear renaissance didn’t happen; the government pulled funding from CCS projects; and the cost of renewables plummeted.

The government has now offered new CCS funds - but for tackling carbon emissions from industrial clusters, rather than from power generation.

The new technology report comes from a government-funded consortium of academics from Cambridge, Oxford, Nottingham, Bath and Imperial College London.

It’s being debated in the Lords on Thursday. The debate’s sponsor, Baron Browne of Ladyton, said it carries important messages that should be heard.

The report says: “Businesses and the public want to act to eliminate emissions, but exaggerated claims about the speed at which new technologies can be introduced are holding back progress."

It continued: “Relying on breakthrough technologies to achieve zero emissions by 2050 is risky and delays action.

“Instead, with today’s technologies we can meet the target for almost all activities, but we have no substitutes for cement, shipping, flying, lamb or beef.”

The report says the UK can anticipate having four times as much emissions-free electricity in 2050 as today if current rates of renewables expansion continue.

This, it says, is enough to supply 60% of today’s energy-using activities, if they are electrified.

It says to close the remaining energy gap, we could make incremental changes to the way we use technologies - such as buying smaller cars rather than SUVs.

Another option is to take the train instead of the car, or put more passengers in fewer cars (ride sharing).

Yet another possibility is to only heat rooms where people are sitting, and swap gas boilers for heat pumps when they need to be changed.

The government, the report says, should start a debate on these issues.

It says the two outstandingly difficult areas to de-carbonise are shipping and cement manufacture.

Julian Allwood, lead author and professor of engineering and the environment at Cambridge University, told BBC News: "The problem with delivering climate mitigation is the tension between the government wanting to deliver solutions based on technology and protestors and scientists asking for fast action that bites much more rapidly than we can bring new technologies into place.

"So although new technologies may become relevant by 2100, the number operating at scale in 2050 will be very few. Probably we’ve got to deliver on climate change with today’s technologies."

The message contradicts several comments from the Prime Minister putting faith in technology to deliver 2050 targets. Recently, the Health Secretary Matt Hancock said no one needed to fly less, and that technology would solve the problem.

The government has committed to having CCS in industrial clusters from the second half of the 2020s and CCS at scale by 2030.

The net zero scenario from the Committee on Climate Change includes 75-175 Megatonnes (Mt) of CO2 being captured and stored per year by 2050.

The report's authors say it typically takes 30 years for a major new technology such as carbon capture to solve all its complexities, including legal and safety implications; and public concerns, before it begins to be widely adopted.

But this will be too late to hit the government's 2050 targets.

A government spokesperson said: "Achieving net zero by 2050 requires decisive action across the economy, including developing a range of approaches and technologies.

"Carbon capture, usage and storage (CCUS), for example, can play an essential role as part of a balanced approach. Our ambition is to be a world leader in this technology."