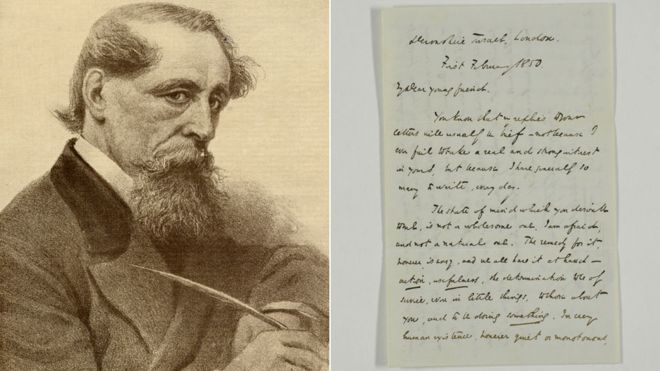 Letters by Charles Dickens, revealing his state of mind while working on novels including A Christmas Carol, are to go on display for the first time.

In one, he discloses: "I have been writing my head off since ten o'clock..." despite being on holiday.

The 25 unpublished letters are part of a huge collection of manuscripts, books from his library and personal items.

They have been acquired by the Charles Dickens Museum in London and will go on display later in the year.

The acquisition is being announced to mark the writer's birthday on Friday.

While he was writing A Christmas Carol, Dickens sent a letter dated 9 November 1843 to a close friend.

"I have half done the Christmas Book, and am resting for two days before going to Chuzzlewit [Martin Chuzzlewit, his sixth novel] - that is, if I can call anything rest, with that before me.

"Yesterday I walked a great deal. Today I am going out on horseback, for a thirty mile ride."

Cindy Sughrue, director of the Charles Dickens Museum, says the letters shed light on Dickens' "creative process" and help answer the question "what did he do to enable himself to write?"

Exercise was clearly important. Another letter was written in 1846 when Dickens and his family went to stay in Switzerland for several months. At the time he was starting work on Dombey and Son.

"It is a tough day, but it is a great thing to get rid of the heat... I may perhaps take a boat for exercise, this evening after dinner…" Dickens wrote.

Sughrue finds fascinating Dickens' ability to keep on working, no matter what his circumstances.

"It's this mixture of being on holiday… enjoying a completely different culture and still 'writing his head off' and meeting those publication deadlines throughout," she says.

"He worked hard and he played hard."

And while Dickens destroyed most of the letters sent to him, there is also the only complete exchange of letters that has survived - between Dickens and one of his fans, a young Danish woman.

In one he offers her advice, writing: "The state of mind which you describe is not a wholesome one… the remedy for it, however, is easy… action, usefulness.

"Let me have the great gratification of believing, one day, that the correspondence you have opened with me, had done some good, and made a lighter and more cheerful heart than it found in you."

The Charles Dickens Museum acquired the collection from an American who had spent more than 40 years putting it together.

The museum raised the £1.8m to buy it with the help of grants from the National Heritage Memorial Fund, Art Fund, Friends of the National Libraries and the Dickens Fellowship.

Mark Dickens, the great-great-grandson of Charles Dickens, said: "This quite staggering material brings us even closer to the man himself, his character, feelings, family and friends."

The collection will now be catalogued and conserved - and put online, as well as on display at the museum.