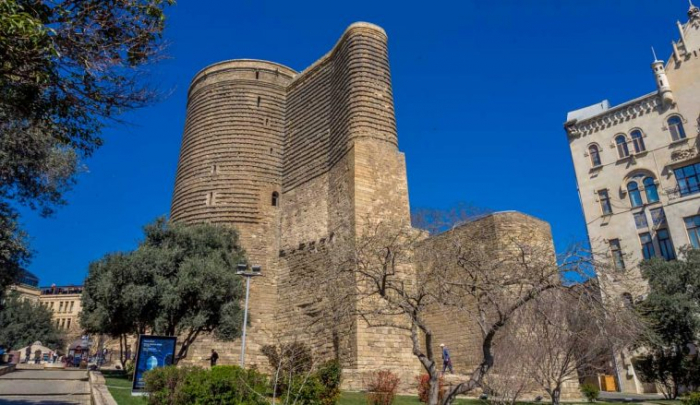 It was my fourth visit to Azerbaijan and great to be back in Baku, the city, the capital. Personally it is one of my favourite cities to visit. Those that know me and of my previous visits to the country know it is a place full of culture, great food, such friendly people and no matter how many times I come there are just so many things to see and learn about. It is always a visit of discovery and even going back to previous haunts I learn something new.

At the front edge of the Old City of Baku, facing the Caspian Sea, there is the Maiden Tower (Qız Qalası), a building/tower that is a huge symbol of Azerbaijan that I have admired on previous visits but excavations and visitor improvements have prevented a closer look. Now back to all its ancient splendour it was about time to take a closer look, inside and on the top. 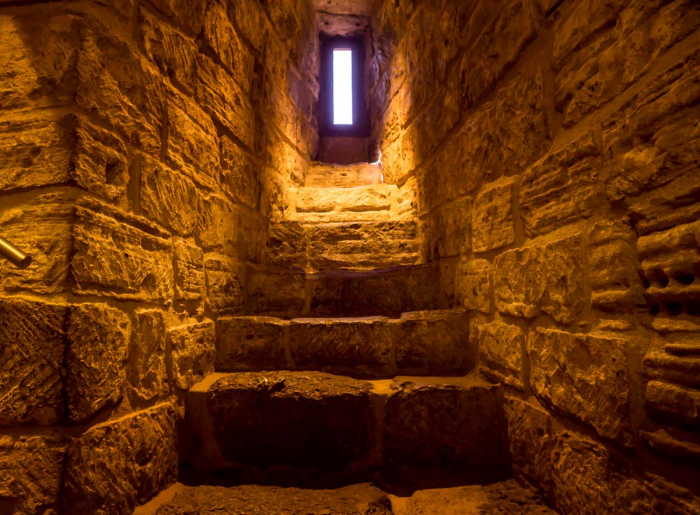 When? Why? How? And who by? These are some of the mysteries that have added to the legend of the Maiden Tower for centuries. In Baku and Azerbaijan it has become a national symbol. Having seen it with my own eyes a few times now it is not hard to see why. It is unique in shape and meaning plus it harbours just as many secrets within as it does from outside.

The shape? We often think of cylindrical tall towers, many used as fortresses or watch towers. Indeed this does sit overlooking the Caspian Sea and in days gone by the sea would have come all the way to the foot of it. Plus it sits right on the edge of the Old City and the walls. Within the cylindrical tower there are 8 floors. You can see in photos though that it has a part sticking out towards the sea, not in a straight line but curved, this is in solid state. Look at it from above and you can see many things that add to mystery. It forms the shape of the numbers 6/9? Think yin-Yang. 9 the beginning of life and 6 the end of life/underworld. You could also say it is the shape of the Buta (paisley used it in their prints) that comes from a Sanskrit word for light. 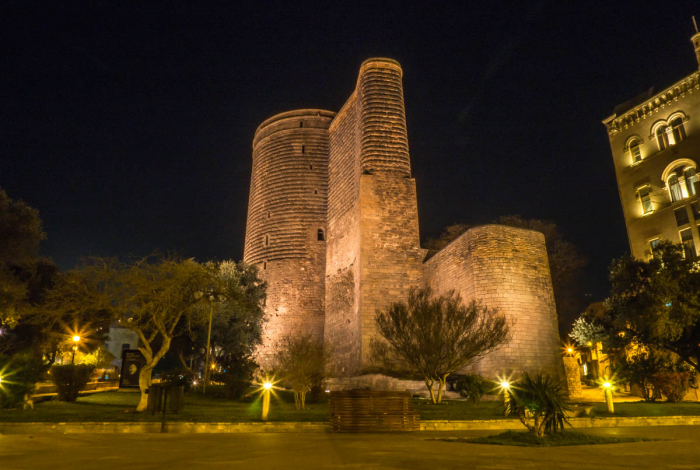 Why and When? Again shrouded in mystery. It is known as a 12th century structure as seen today. But there are experts that can date back maybe a smaller tower back to around 7th Century. We are of course in the ‘land of fire’ and in coming posts I will show how the area was thus so important to the Zoroastrians. Some archaeologists believe that The Maiden Tower had 7 exits for fire on its top, and Zoroastrian belief was that there were 7 steps/skies on the way to heaven. Near to the Maiden Tower they have found the remains of a 9th Century mosque that used an ancient Zoroastrian Fire Temple in its centre, this only add credence to the claims. The most compelling evidence is that the bottom 3 floors were used as a Fire Temple, the stone is different to the Old City too, and most probably built in 4/5 Century.

The views from the top are special, and for a spot like this I found it not too busy so could enjoy the views over Baku, young and old city. A view over the ages. 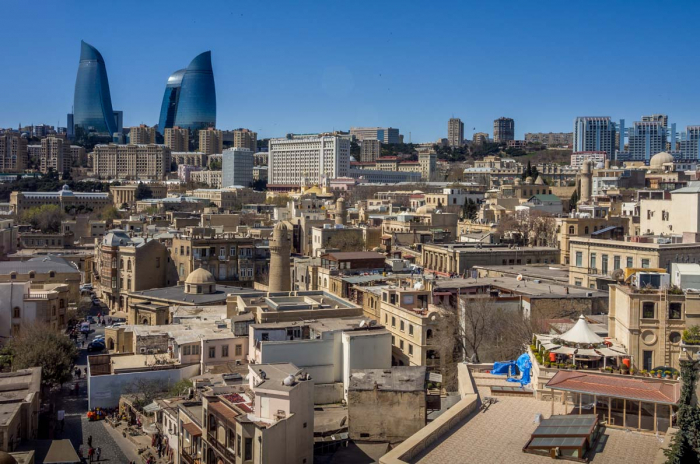 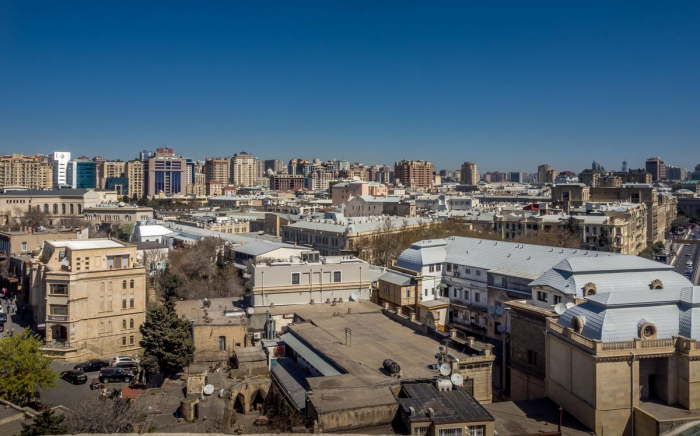 It may also have been built up in 2 parts for various reasons? Was it a fortress that was then added to in the 12th Century to the way we see it today? Or a security alarm that with a fire on top could alert the city that they were being attacked? As I took the stones steps upwards through the floors I saw plenty of evidence for all of this. Excavations have unearthed objects for fighting and some are on display within. From ancient to middle ages, this was an area to be protected from enemies. Sword handles perhaps once wielded in anger. 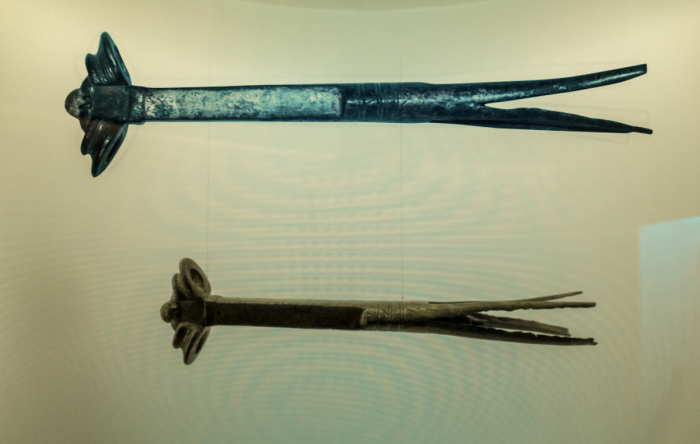 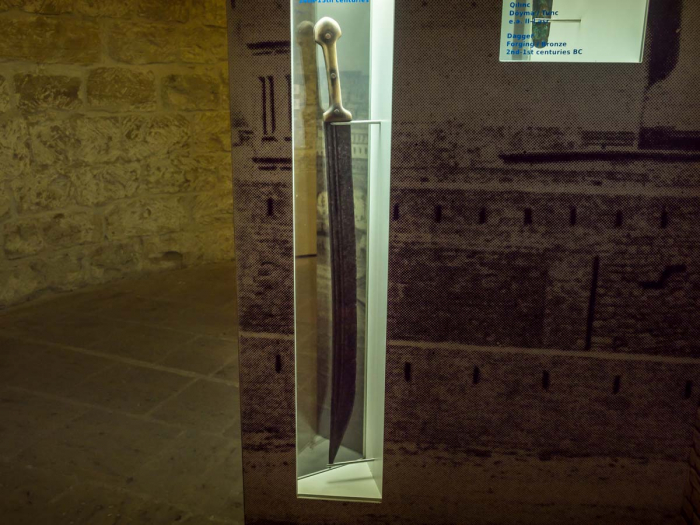 There is also a well up on a higher floor! Why would they need a well up in here that went all the way down underground? Perhaps in time of siege it was a water supply that enabled keeping safe and alive. Please also note that today’s entrance to the tower wasn’t possible back then but you needed a ladder to get up and in. 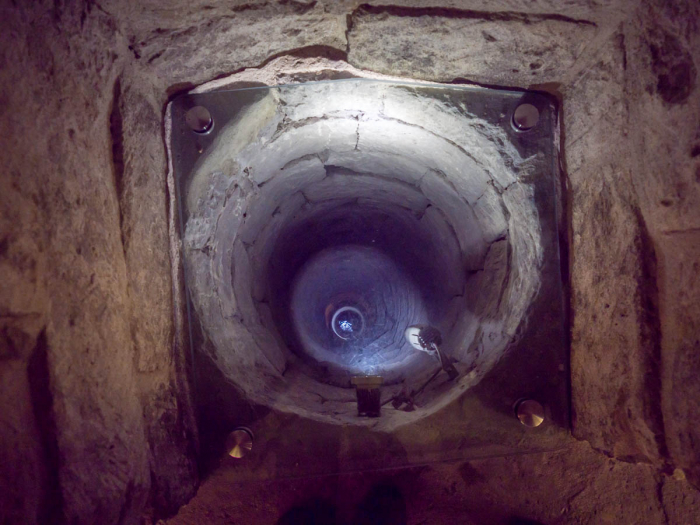 Why called Maiden Tower? Mystery and folklore leads the way again. A big local story that I have heard a few times now on my travels to the City. Once there was the daughter of a King (maiden in the tower) in love with a fisherman. His love for her was so strong that he walked across the sea to the tower to meet her. One day he started to doubt the love and he sank into the sea and drowned. The maiden saw him drowning and jumped in to save him, fear ruled her heart more than love so she died too. Maiden Tower this a symbol of love and purity?

There are many many old tales in similar vain, another twist is now shown often as a ballet in Baku Theatre. The King’s wife had given him a daughter instead of a son so the King wanted her killed. The nanny took her away in hiding until 17 years later the King saw the maiden and wanted to marry her and placed her in the tower! her fiance was of course angry so he killed the King and raced up the tower to rescue his maiden. Alas she mistook the footsteps chasing up as the King so jumped to her death.

However, the most logical reason for the Tower’s name is that it has never been destroyed by any enemy and thus never taken by the destructive spirit of Angra Mainyu and is therefore a “maiden” tower of the Zoroastrianian God named Ahura Mazda. Ah we are back round to the Zoroastrians again. 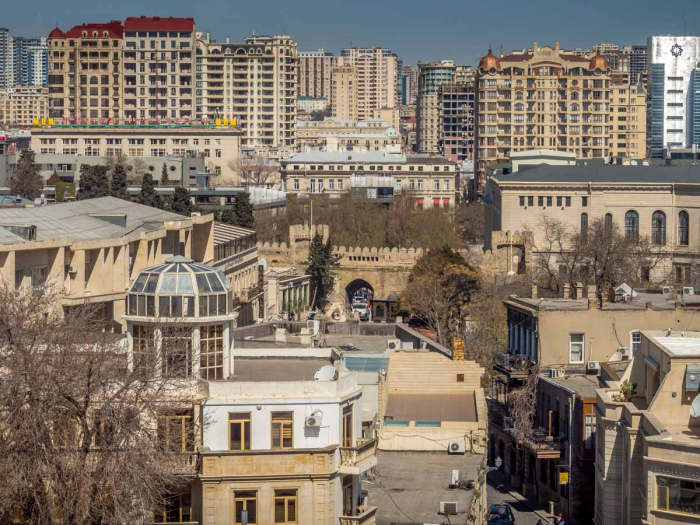 The museum within the tower is full of interesting items as I have shown but of course there is plenty more that is far too much for this page. The history of symbols of Baku for instance. You may often see an image like this on the walls or adorned on buildings. A bull with 2 lions. 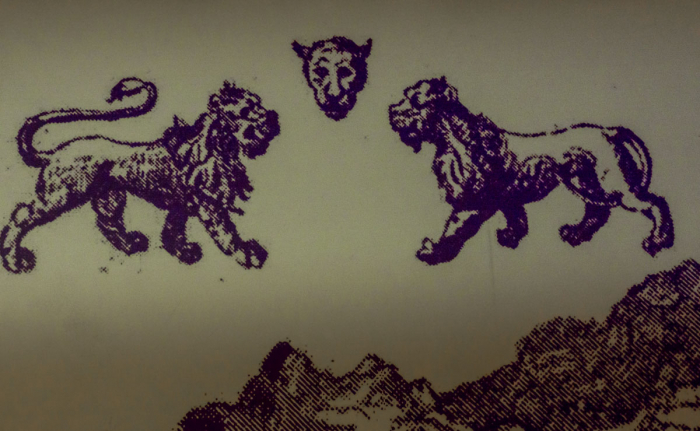