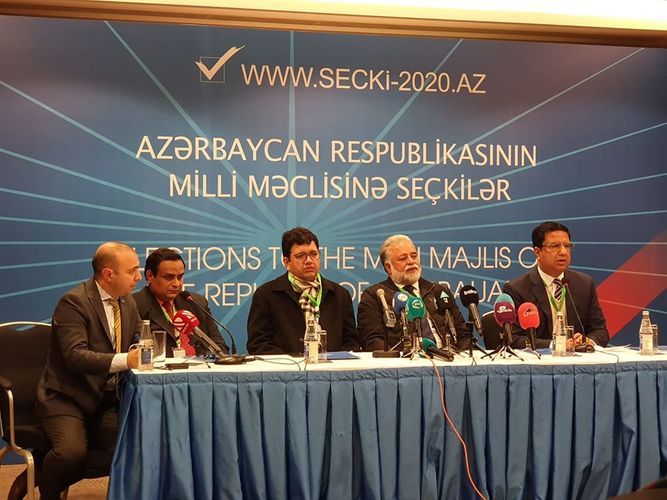 by Riaz A Malik

Completion of Parliamentary process in a transparent and peaceful manner is commendable:90,000 local and more than 883 international observers monitored the election

Completion of Parliamentary process in a transparent and peaceful manner in Azerbaijan is praise-worthy: hopefully, the new Government will carry forward the reforms agenda in a more robust way and will be able to play its role in the region in a more effective method. This has been stated by the head of Pakistan-Azerbaijan Parliamentary Friendship Group Murtaza Javaid Abbasi during a post-election Press conference along with Col (R) Khalid Taimur Akram, Executive Director Centre for Global and Strategic Studies and Dr Mahmood-ul-Hassan Khan, Member Experts Advisory Board Centre for Global and Strategic Studies here on Sunday.

It is noteworthy that both Col (R) Khalid Taimur Akram and Dr Mahmood-Hassan Khan were also here as international observers to monitor the parliamentary elections. Murtaza Javaid Abbasi went on to say that Polling was as per the international standard and norms and the entire credit goes to the Central Election Commission of Azerbaijan for undertaking adequate arrangements for the conduct of the exercise in a translucent way.

Abbasi recounted that Pakistan was the first country which recognized Azerbaijan as an independent state and that both the countries enjoy historical ties which are strengthening and growing with the passage of time.

As far as the Pakistan-Azerbaijan Parliamentary Friendship Group is concerned it will continue to play its role in enhancing Parliamentary and people to people contacts for the benefits of both the sides, he said.

It is noteworthy that some 90,000 local and more than 883 international observers monitored the election and about 200 media houses were allowed to cover and report the exercise.