Human composting could be the future of deathcare 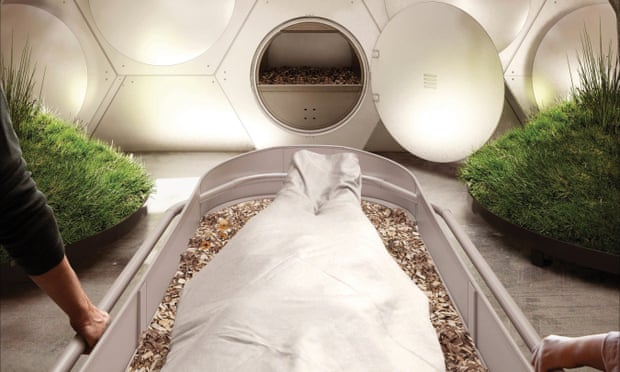 It is viewed as a fitting end for a banana skin or a handful of spent coffee grounds. But now people are being urged to consider human composting and other environmentally friendly “deathcare” options, the Guardian reports.

Speaking before a talk at the American Association for the Advancement of Science conference in Seattle on Sunday, Lynne Carpenter-Boggs, a professor of soil science and sustainable agriculture at Washington State University, said: “Death certainly isn’t the biggest environmental impact we have in our life process. But we can still look for new alternatives.”

Washington recently became the first US state to legalise human composting and UK funeral directors are reporting a surge in requests for green burials and other more sustainable alternatives to burial and cremation.

Carpenter-Boggs, who also acts as scientific adviser to Recompose, a Seattle-based company that plans to open the world’s first human composting facility next year, presented data from a pilot project in which six bodies were composted to test the safety and effectiveness of the approach.

The process, known as natural organic reduction, turns a corpse into two wheelbarrows’ worth of soil in four to six weeks. The body is placed in a reusable hexagonal steel container along with wood chips, alfalfa and straw. By carefully controlling the humidity and ratio of carbon dioxide, nitrogen and oxygen, the system creates the perfect conditions for a class of heat-loving (thermophilic) microbes that dramatically accelerate the normal rate of decomposition.

“It’s a bit of a surprise that when the microbial activity starts up and there’s enough feedstock, a whole different class of organisms, called thermophilic organisms, become active,” said Carpenter-Boggs.

The pilot found that everything, including bones and teeth, is reliably transformed into compost (non-organic materials such as pacemakers and artificial hips are screened for and recycled). The soil was also found to contain low levels of coliform bacteria, an indicator of biological safety, meaning that relatives could safely scatter their loved ones’ remains like ashes, or use them to plant a rose bush or fertilise a vegetable patch.

The process reportedly uses an eighth of the energy of cremation. According to Carpenter-Bogg, cremation in the US produces as much CO2 as burning 800,000 barrels of oil – for an individual, that is equivalent to taking a flight from London to Rome.

Burial can also be problematic: embalming fluids can leech into groundwater and coffins use up natural resources such as wood and metal.

Deborah Smith, of the UK’s National Association of Funeral Directors, said: “To date, human composting has not been undertaken in the UK, but there are ongoing attempts to introduce another alternative form of disposal, alkaline hydrolysis, referred to as water cremation, which is already permitted in some US states. For those seeking a burial in the UK that is as natural as possible, there are increasing numbers of privately owned burial grounds at which it is possible to be buried in a woodland setting, in a biodegradable shroud, with a tree or simple plaque marking the location.”

Sandy Sullivan, the founder of the Leeds-based company Resomation, which sells its liquid cremation machines to the US and is hoping to begin sales in the UK, said: “It’s low running cost, much more environmentally friendly.”

The process involves placing the body in a pressurised tank of water mixed with potassium hydroxide, which is heated to a temperature around 150°C. After four hours just the bones are left, which are pulverised into a white powder. “I think it’s a more gentle process than burning,” said Sullivan. “Families are choosing it mostly because they see it as gentler.”