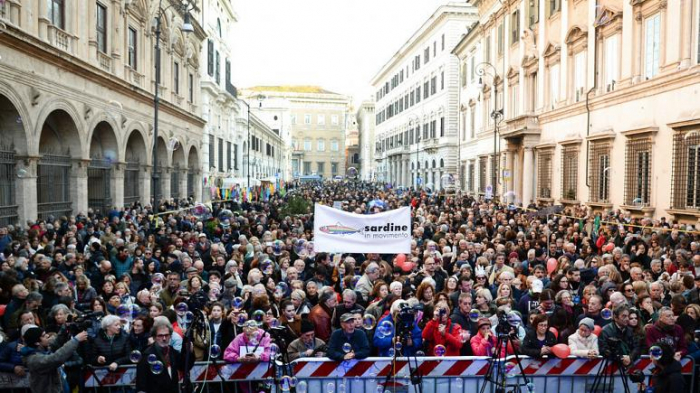 Several thousand people gathered in Rome on Sunday to join a rally organised by the anti-populist 'Sardines' movement.

The absence of the leaders of the movement didn't discourage people to support members of the Sardines who set foot on the stage in St Apostoli square in the heart of capital, alternating brief speeches to moments of music.

The Sardines reiterated their message of inclusiveness, with the intention to widen their supporters number.

"We simply are anti-fascists, we are sardines," said Anna Claudia, a member of the Sardines movement.

The grassroots protest movement contributed to thwarting right-wing populist Matteo Salvini, who attempted to unseat the center-left regional government in the left's historic stronghold of Emilia-Romagna.

The Sardines rose to unexpected success, gathering 6,000 people in Bologna during their first protest in November, and reaching some 40,000 just before the election. Their activism is credited with sharply boosting turnout in the regional election, according to the SWG polling organization.

Yet the Sardines still remain outside politics, so for now it's not clear how their energy can be channeled into future Italian elections, including at least six regional votes this spring.