This is not that Tigran: How Pashinyan is confused about the history- ANALYSIS 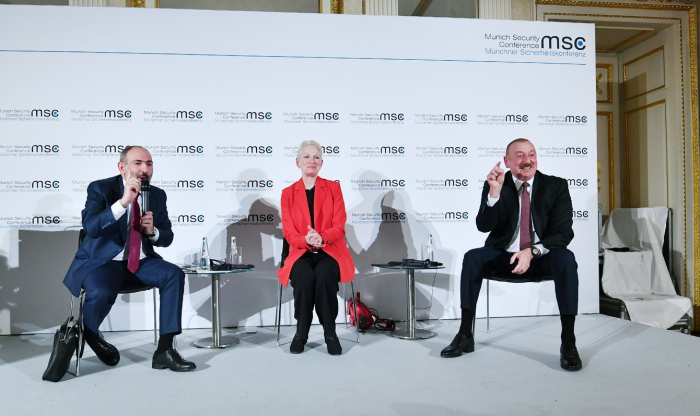 The world witnessed the marches of great emperors and the replacement of the conquerors with the new ones who conquered vast territories and built imperial structures over time in BC times. Of course, Tigran the Great, the king of “Great Armenia” from c. 95 to c. 56 BCE was one of the commanders who was subjected to injustice.

Armenians try to introduce Tigran, a son of the great Persian wise man Artaban from the Achaemenian Dynasty, as a king of the “Great Armenia. Even the name “Tigran” is not in Armenian. It derives from the “Tigris” river meaning “fighting with arrows”. Probably, neither Tigran nor his Chaldeans could imagine that representatives of a fake tribe would use him for their fake history. They even could not believe that Tigran would be a tool of fake Armenian propaganda and be remembered as an ancestor of Armenians in 2020.

Herodotus the Greek historian who is known as the father of history writes, “There was no third nation to be able to dominate in this region except the Medes and Persians”. Also, Strabo has never mentioned Armenian tribe while writing about 26 tribes.

Most probably, if Herodotus and Strabo knew about the falsification of history and geography, they would get offended. Also, if the Rome Empire were aware of their “fight” with the “Great Armenia”, they would wait for the attack of the barbarians to fall.

Diplomat Ilham Aliyev gave Pashinyan, populist Prime Minister a history lesson in Munich, the capital of Bavaria. Ilham Aliyev said, “From a historical point of view, back in 1805 the khan of Karabakh Ibrahim khan signed a treaty with the general of Russian Empire Tsitsianov. Under this treaty, the Karabakh khanate, Azerbaijani Karabakh khanate as an independent country became under the rule of the Russian Empire. In that treaty which was called Kurakchay treaty-the text of this treaty is on internet-nothing is said about the Armenian population of Karabakh. Other treaties were signed in 1813 and 1828-Gulustan and Turkmanchay. Under these treaties, the rest part of Azerbaijan became part of the Russian Empire and Dagestan, Georgia and Armenia also. Therefore, this is a historical part of the issue. Then during the period when Russian Empire collapsed, and Georgian and Azerbaijani Democratic Republics were established, one of the first decrees of the Azerbaijani Democratic Republic in 1918 was to transfer Yerevan from Azerbaijan to Armenia and to announce its capital of Armenia. This is also a historical fact. If you give something to someone that means that this something belonged to you!”

Let’s see what Pashinyan told:” Armenian king Tigran the great was negotiating with Pompeii, a Roman military leader, there was not any country in the South Caucasus, in all around the world named Azerbaijan. Therefore, I do not think it is the right way to go so far, because I could go even further and start from for example 400 years before Christ. But I wouldn’t do that, because I don’t think it is the right way”.

Alright, that was not the right way to continue the debate. However, Pashinyan was not aware of Ilham Aliyev’s knowledge of history and felt that he was going to fail. Therefore, he tried to change the course of the negotiations but he went down in flames. Why?! Let us go back to 400 b.c. What happened in this geographical location in that period?

“Armenians have been a hypocrite and insincere nation since ancient times for both their character and geographical position. They have always been filled with hate and rage towards Romans and Parthians”, Roman historian Cornelius Tacitus noted in his works.

However, Armenian historians made absurd statements claiming as if the representatives of “the Great Armenia” were the only foreign nation to sit next to the Romans in the Senate of the Roman Empire. Even if they argue, “Armenia” was described as a close partner of the Roman Empire in the ancient world map near the Coliseum in Rome. Nevertheless, there is no any ethnic-statehood relationship between that Armenia and current Armenia.
It is true that Ancient Roman coins with Armenian symbols and images of Armenians were discovered. Even Zelob Glak, an Armenian historian argues in his works stating their ancestors were Romani people who migrated from India’s Punjab province to the east of the Byzantine Empire (current Syria-Lebanon) following Scythian occupation. The “Great Soviet Encyclopedia” and the book “World population” published in Moscow in 1984 also confirm this fact highlighting that the Armenian, Romani and Punjabi languages are closely related to each other.

Medieval Armenian historian Moses Khorenatsi writes, “We, Armenians are a weak nation and have always lived under the control of other’s governance”. However, Pashinyan made a nonsensical argument saying that in ancient times, there were only Armenians and Georgians in the Caucasus, not Azerbaijanis. On the other hand, 19th-century famous researcher Chopin states, “Armenians are not ancient inhabitants of Arminiya. They migrated from Assyria”.

Claiming that the Azerbaijanis were migrants in this geographical area, and adding that Georgians and Armenians are of indigenous origin, Pashinyan once again proved his ignorantness.

However, they also try to steal Georgian history by creating a fake history. According to Armenia's sick imagination, they had an independent state even back in the 3rd millennium BC ( bc 2492/2107 - bc 325), but this is nothing more than a myth.

Armenians try to link the roots of the Bagratides, allegedly one of the four Armenian tsars, to ancient Israeli tsar David (David) and his son Solomon (Suleyman), whose names have been mentioned in the Bible. In doing so, they want to prove that they are an ancient nation that was mentioned in the sacred Bible.

According to the Armenian historians, the Bagratuni tribe has taken its origin from a Jewish captive called Shambot (Armenian Smbat or Sumbat), who was brought to Armenia. However, the Georgians have their own explanation of the origin of the Bagration. Unlike the Armenians, they attach the roots of the dynasty to the Parnavazians - Iberian tsarist dynasty, who ruled in the third century BC.

Apparently, Armenians have always tried to link their roots to Parthians, ancient Urartu, ancient Biblical myths, Georgian kings or Albanians and other nations in order to prove they are an allegedly ancient nation. They have not yet been able to clarify their origin or it will not serve their purpose to clarify it. Grandmaster Ilham Aliyev checkmated his opponent Nikol Pashinyan and made him not to talk about history anymore.

Pashinyan's lies are not based on any serious historical sources. Although the works of Herodotus and other historians are widely discussed by the indigenous peoples of the Caucasus, the name of the Armenians cannot be found anywhere. Historical sources prove that in the Seleucid state in present-day Syria, following the victory of two Armenian soldiers over the Romans, they seized the power, declared a major part of Syria as Armenia, and massively resettled the Armenians living near the area.

According to the sources written by Strobon, later as a result of the clash emerged between those two soldiers, one of them came to the Caucasus in BC II century and established second little Armenian state by occupying a number of provinces belonging to the Media, the Azerbaijani state. The "Great Armenia", which the Armenians invented, is the first Armenian kingdom established not in the Caucasus, but in Syria, near the Euphrates River, and the Seleucid.

Although "Greater Armenia" was a geographical term used by historians to distinguish "Little Armenia" which was existed on the upper part of the Euphrates River and the Van Lake, Armenians later politicized it and claimed that they had a powerful state that had historically covered the Caucasus, including the Black Sea and the Mediterranean.

The Tigran, the ruler of the Armenians who had migrated to the Caucasus, is merely a namesake with the Achaemenids ruler. For example, Nikol Pashinyan and Nicolas Sarkozy, Robert de Niro and Robert Kocharyan, etc. After the Roman state defeats Tigran in 69 BC, the Armenian state began to weaken. Armenia was ruled by Artsax, the son of Parthian Tsar. Apparently, Artsakh Province has never been in subordination and composition of Armenia, on the contrary, Armenia has been subordinate to it.

After Sassanid claimed victory over the Roman Empire in BC IV century, Persians had controlled first Armenian state in Syria. Later on, Armenians moved to Middle Asia – present-day Turkey. 30 years after these events, the small vassal Armenian state in the Caucasus, dependent on Parthians and Albanians (ancient Azerbaijanis), is divided between Roma and Sassanid. In other words, the history itself also proves President of Azerbaijan Republic Ilham Aliyev’s opinions “The aim of the policy has been pursued by Armenian nationalists against our people through military, political, ideological and other means for nearly two hundred years was to alienate Azerbaijanis from their native lands, seize new territories, and create a mythical “Great Armenia” state”.

Denying that the state of Azerbaijan has historically existed in this geography, Armenians say that allegedly their first homeland was "Greater Armenia" in the Caucasus and the reason for their scattering was to protect the borders of the Byzantine and Sassanid empires and to ensure the demographic balance in the Byzantine populated areas. During the conflict between the Arab Caliphate and the Byzantine Empire in the 7th and 8th centuries, they settled in Cilicia, a small mountainous region in what is now northern Syria. However, there are no reasonable historical sources about the activities of armed groups of hayks.

After Armenia adjoined to Byzantine, Seljuk Turks conquered Anatolia and Armenians settled in Cilicia have established Armenian tsarism there in the 14th century. It is the place where they spread to a number of countries. That is, Armenia is not a historical homeland of Armenians at all. It was also approved by the historians that the names of “Armenia”, “Armina”, “Armini” which were mentioned in historical sources, have no relation with present-day Armenians, who called themselves “hayks” and Hayastan. This is not an ethnic but geographical notion.