How do black holes form? - iWONDER 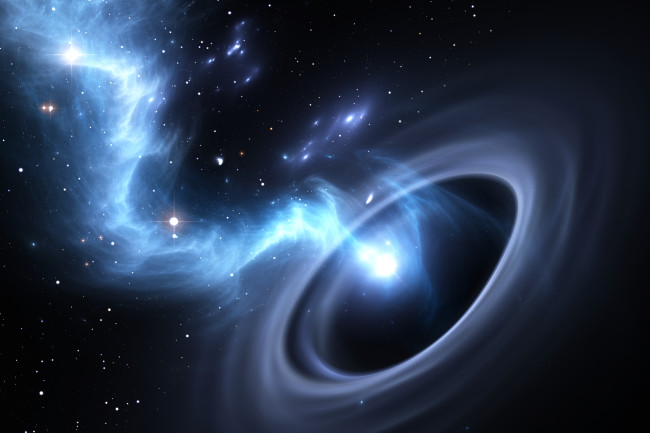 Some black holes form when a massive star collapses onto itself. But many mysteries still remain around these strange objects.

The most well-understood black holes are created when a massive star reaches the end of its life and implodes, collapsing in on itself.

A black hole takes up zero space, but does have mass – originally, most of the mass that used to be a star. And black holes get “bigger” (technically, more massive) as they consume matter near them. The bigger they are, the larger a zone of “no return” they have, where anything entering their territory is irrevocably lost to the black hole. This point of no return is called the event horizon.

Eventually, by growing and consuming material – planets, stars, errant spaceships, other black holes – astronomers think they evolve into the supermassive black holes that they detect at the centre of most major galaxies.

First, it would take longer than the universe’s current age for black holes that started as dead stars to grow to galaxy-center-sized black holes. So astronomers also think the universe might have jumpstarted the process by creating giant primordial black holes in the moment just after the Big Bang – though this is just as weird and problematic as you might think.

Second, there’s very little direct evidence of so-called intermediate-mass black holes – the ones in between star-sized and galaxy-sized. Astronomers expect to see some black holes in this middle phase, on their way to becoming supermassive but not quite there yet, and so far, they mostly don’t.

Both tiny and enormous black holes do exist. We’re just still connecting the dots between them.

Read the original article on discovermagazine.com.