Turkey says millions of migrants may head to EU 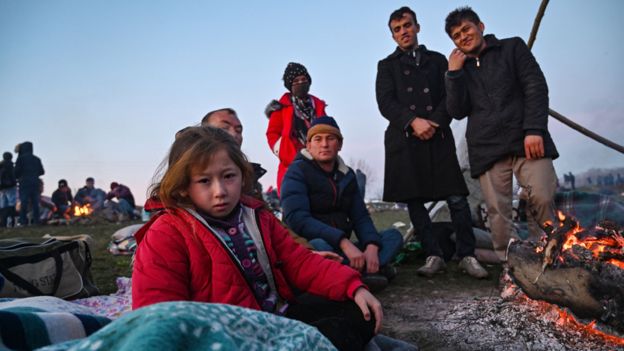 The Turkish president has warned that "millions" of migrants and refugees will soon head towards Europe.

Recep Tayyip Erdogan was speaking after announcing Turkey could no longer enforce a 2016 deal with the EU to prevent migrants entering Europe.

Greek police have used tear gas to stop thousands of migrants entering and the country has asked the EU border agency Frontex for urgent help.

Mr Erdogan said Turkey could not cope with a new wave of Syrian refugees.

Nearly a million Syrians have fled to the Turkish border from the Idlib area, amid heavy fighting between Turkish-backed rebels and Syrian government forces.

Turkey is already hosting 3.7 million Syrian refugees, as well as migrants from other countries such as Afghanistan - but previously stopped them from leaving for Europe.

In a televised speech, Mr Erdogan said the EU had provided no help for resettling Syrian refugees in "safe zones" inside Syria.

After Turkey opened its doors for migrants to leave its territory for Europe last week, he said, "hundreds of thousands have crossed, soon it will reach millions".

The Turkish leader gave no evidence for his figures while Greece said about 1,000 migrants had reached its eastern Aegean islands from Turkey since Sunday morning.

In addition, Greece said it had stopped almost 10,000 migrants from crossing its land border in 24 hours. Some migrants tossed stones and metal bars when stopped, and Greek border guards fired tear gas.

Besides Syrians, there are Afghans and West Africans among the migrants at the border.

"Either we bring these people to a dignified life in their own land, or everyone will get their share of this burden. Now the unilateral sacrifice period is over," Mr Erdogan said.

In a statement on Monday, the Greek government said, "Turkey, instead of curbing the traffickers' channels of migrants and refugees, has itself turned into a trafficker."

Greece has blocked any new asylum applications for the next month, because of what it calls the "coordinated and massive nature" of illegal migration from Turkey.

"This relocation of people has nothing to do with international law regarding the right of asylum, which concerns only individual cases," the statement said.

Frontex says it is examining how best to help Greece with a rapid deployment of EU border guards.

Frontex already has nearly 400 personnel in and around the Greek islands, 60 officers in Bulgaria and a smaller contingent in the Evros region, at the Greek-Turkish border.